Photo: Roy plans a trip each year to place flowers on his mother’s grave.

Fifteen years have gone by since Mom died.

Through the years, around the anniversary of her death or on her birthday in July, I try to make my way to the little South Louisiana Cajun town of Abbeville.

Last week Phyl and I made plans to make a quick trip like we had done so many times before.

We would place flowers on her grave and visit the graves of my grandmother and grandfather, whose sites joined Mom’s.

Our plans were to bring our daughter-in-law, Ethel, Mark’s wife, who is from Guatemala.

She had never been to Louisiana so this was a good chance to show her the community that raised me.

The cotton fields I’ve written about are no more.

There are still plenty farms in South Louisiana but most are rice farms that also harvest crawfish and still plenty sugarcane fields.

The cane harvest takes place in October and that’s when the Steen Syrup mill cranks up and ships its famous product around the world.

Markdecided to make the one day run with us and daughter Karen offered to drive us.

We were all set for a great day and that’s what it turned out to be, however, it wasn’t without a bit of sadness and disappointment.

When I was a boy, the shade of a large Oak tree, in the corner of the yard, was where family activities and special events took place.

I had climbed it hundreds of time.

Mark and Karen also recalled, while spending time with their grandmother in the summer, how much fun they, brother Allen and cousins had climbing that old tree.

Over the many years, the tree got to be a majestic Live Oak, with limbs as big as trunks that extended to cover much of the back yard.

On every trip I had admired that mighty oak that was so much a part of my upbringing.

I was shocked and saddened to see since I’d been there last, the great oak is dying.

Half of its massive limbs have fallen.

Its huge trunk is coming apart with only a couple limbs remaining.

In a few months it will be totally gone.

Over 80 years have gone by since my uncle first lifted me up in the fork of that tree.

I never would have imagined I would outlive that great oak.

The old house, that was once a three-room, rust-colored railroad shack when my folks bought it, has been added onto.

Grandma’s old house, like many old places around town, is painted a light brown pastel color.

Many of the shotgun houses are painted in different pastel colors.

The yard is smaller than I recalled.

Another thing that seemed different was the space under the house that sits on piers.

I played a lot and buried a lot of treasures under that old house, most often I couldn’t find them again.

Today, there just isn’t enough space for me to crawl under.

The other big disappointment was as we toured the old picturesque town with its many historical homes, we found the old downtown area, with unique, architecture and two-squares, is also dying.

The buildings remain the same but are mostly unoccupied.

Some have been converted into homes or apartments preserving its architecture.

All the businesses seemed to be closed.

In my youth downtown was a beehive of activity.

Today the new bypass has killed downtown, like it’s done in so many places.

We spent some time at the historical St. Mary Magdalene church and square, with massive 200-year-old oaks.

It was where teenagers gathered in the evenings.

It was also where the girls taught us boys to dance.

The old Catholic church is where I was Baptized and also made my first Communion.

In my youth that church helped me through the rough spots and gave me a foundation.

After we toured the area, we met my sisters, Fay and Shirley and brother-in-law Louis, who drove down from Lafayette to join us at Shuck’s Restaurant.

Shuck’s is famous for good food but their specialty is oysters and great seafood.

I once had three half-sisters but our youngest, Jane, died a few years ago.

It was great for the three of us who remain to get together.

Phyl has been in the family 65 years and is considered a sister.

Mark and Karen got to visit their aunts and uncle and Ethel, who knew them through Facebook, got to visit with them.

Ethel and I have a lot in common despite being raised worlds apart. She has known poverty and you can see the sadness in her eyes when she speaks of how hard her mom had to work just to survive.

Ethel has always worked, got her education and with a college degree has started and operates her own business.

She comes from a beautiful place where fruits, bananas and avocados grow wild in her yard.

She enjoyed our trip and learning about the Cajuns.

Her emotions run deep and she is filled with kindness. 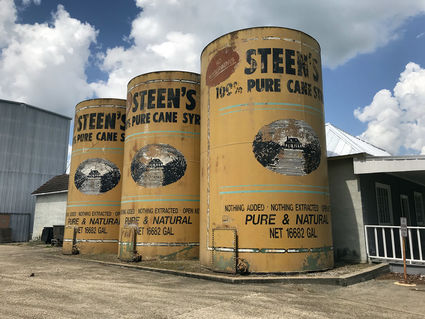 She will head home this week to care for her 90-year-old mother and get back to her business.

I learned from her that regardless of where you’re from, all people are very much alike.

We’re all humans with the same feelings.