West Orange-Stark went back to the basics when Little Cypress-Mauriceville threatened to make it a game this past Friday night. After all, defense wins championships, right.

The Mustangs stayed perfect at 2-0 after the 36-14 cross-county rivalry with the Bears at Mustangs Stadium although early it appeared that LC-M might have figured out how to top the Blue and Silver.

WO-S started the scoring when Jamarcus Ross ran it in from four yards out, ending a 12 play, 60 yard drive to give the Mustangs a 7-0 advantage.

The Bears, who fell to 1-1 with the loss, came back to knot the game on a seven-yard touchdown pass from Ethan McCollum to Brandon Pollock.

The Mustangs, as usual, came charging back to score again when Elijah Gales scored from 18 yards out for a 14-7 advantage.

WO-S upped that lead to 20-7 early in the third quarter after the Mustangs defense held LC-M for a three-and-out to start the half. Gales got the call again, crossing the goal line from the eight. A missed extra-point kick left it at 20-7.

LC-M would make a game of it again when D.J. Spears took a kickoff return 90 yards for a touchdown, cutting the Mustangs’ lead to 20-14.

That’s all the offense the Mustangs’ Chain Gang would allow though as Gales scored twice more in the second half and Angel Ibarra hit for a 37-yard field goal for the 36-14 final.

Gales wound up with 23 carries for 235 yards and four touchdowns, more than half of the Mustangs’ final 441 yards of total offense.

West Orange-Stark now travels to Newton to take on the undefeated Eagles, while Little Cypress-Mauriceville hosts a home game against Jasper.

Orangefield has jumped out to a 2-0 season start thanks to a Week 2 win over Livingston as the Bobcats outlasted the Lions 20-14 at F.L. McClain Stadium in Orangefield.

The Bobcats win got off on a defensive step with a first-quarter interception by Heston Puckett. A handful of plays later, the Cats were in the end zone on a Gunner Jones 4-yard run to give Orangefield a 7-0 lead.

Late in the first half, the Bobcats would grind out an impressive 97-yard, 19-play drive that ate up most of the second quarter clock. The drive that started at the Lions’ 3 ended up at the Bobcats’ end of the field where Jones ran in from a yard out for the 14-0 advantage.

The Lions finally got on the board in the third when a short Bobcats punt gave the Lions the ball at the Orangefield 25. Damien Ruiz found the end zone from five yards out to pull the Lions to within a score at 14-7.

The Bobcats defense set up the critical third touchdown for Orangefield as Clayson Choate picked off Ruiz. Given that opportunity, Kaiden Dubose took off on a 34-yard touchdown run to put the Cats up 20-7 late in the third quarter.

The Lions would manage to return a kickoff for a touchdown but again, like in the first half, that TD was negated by penalties. Eventually, Ruiz worked to bring Livingston back to within a score, scoring on a 17-yard run for a 20-14 difference.

The Bobcats defense held the final 10 minutes of the game, allowing Livingston just under 200 yards of total offense.

Chase Broussard had five carries for 66 yards to lead the Bobcats, while Dubose finished with 60 yards rushing. Livingston’s Ruiz ran for 94 yards on 14 carries and threw for 69 more on 9 completions in the loss.

The Jasper Bulldogs rolled past Bridge City 65-14 this past Friday night at H.N. Litton Field in Bridge City, scoring on each of its first four possessions to put the game out of reach really before it started.

MonTavien Hunt scored the first Jasper touchdown on a 55-yard run with 2:35 left in the first quarter, then Carl Limbrick scored on a 39-yard run for the Bulldogs to put them up 14-0.

The Cardinals’ offense finally came alive when Andy Lara took off on a 71-yard run, setting up an Oscar Carranza 27-yard field goal with about four minutes left in the first quarter.

Limbrick, scoring the second of his six touchdowns, crossed from the 2 yard line with 1:44 remaining in the first quarter. On the first play of the second quarter, Limbrick scored again, this one a 20-yard run.

The Cardinals would eventually get its offense back on track, resulting in another field goal for Carranza, this one a 42-yarder, and the Cardinals cut the Jasper lead to 28-6.

With just 11 seconds left in the half, Limbrick managed to find the end zone again, taking the ensuing kickoff 80 yards for a 34-6 halftime lead.

On the first drive for the Bulldogs in the second half, Limbrick found pay dirt again, scoring on a 3-yard run. Then Adams connected with Nolan Smith on a 36-yard pass play to give Jasper a 48-6 lead early in the third quarter.

Ethan Oceguera finally got the Cardinals in the end zone late in the third, taking a quarterback keeper for five yards and a 48-14 difference.

The Bulldogs added a field goal and Limbrick his final TD run of the night, a 45-yarder. The final Jasper score came on a 31-yard run by Ketavion Hadnot. 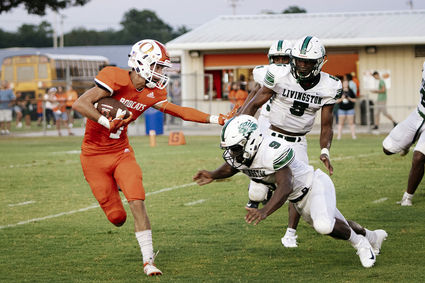 Orange Community Christian picked up its first win of the season at exactly the right time, topping Sanchez Christian 78-53 on Homecoming Night.

Ryan Davis took time out from his football duties to claim the Homecoming King’s crown while Julianna Sylestine was named the 2019 Homecoming Queen.