Eye to Eye with Swamp Creatures and Capt. Eli

Photo: Capt. Eli Tate has offered year-round swamp tours on the Sabine River for over 20 years to people from all over the world.

Have you ever been eye to eye with an alligator in its natural habitat?

People come from around the world to see what the Sabine River Swamps have to offer in flora and fauna. Capt. Eli Tate has been regaling visitors with local history and lore of the Texas/Louisiana swamps for over 20 years.

The stare down from a gator isn’t guaranteed, but it happened Sunday when one alligator swam so close to the boat it came into the shade of the boat’s canopy.

Capt. Tate said it was the woman’s white shirt that drew the gator in. “He thinks you’re a bird,” he told the woman. He personalizes each tour by learning his patron’s names and making them part of the tour, even naming some of the many gators seen, the same as the people on the boat.

It may have been 90 degrees in temperature, but the trip was very comfortable as the boat is covered with a canopy and you get a cool breeze when the boat moves between locations.

“This is the only place in the country you can see all the different types of swamps in one location, because of the elevations,” said Tate. Not only tourists visit the area. Tate also hosts botanists, geologists, biologists and other scientists, because of the unique ecology of the Sabine area.

Tate not only promotes the water activities, but also promotes other attractions in Orange County.

“My boat will hold half a bus. While I take those on the tour, the rest visit other local places such as Shangri La and the Art Museum. Then they all eat together in a local restaurant.”

He has a brochure rack in the ticket office and always invites people to explore other area sites.

Tate said he started out doing tours with air boats more than 20 years ago, but noticed people left the boats immediately, because they were hot at the end, since it wasn’t covered, they didn’t get to see much wildlife, because the noise and speed of the boats ran them off and the noise hurt people’s ears.

Since the boat is quieter, it doesn’t scare the wild life and because they have become so familiar with it and know it poses them no danger, they tend to swim in closer. There were around 10 gators spotted on this particular trip, several egrets, a couple of eagles and a wild longhorn. 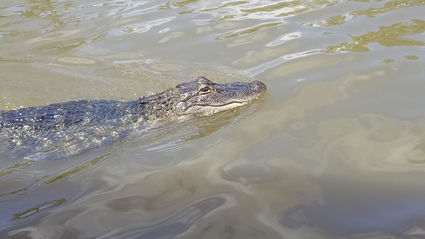 Alligators swam right up to the boat during a swamp tour with Capt. Eli Tate. Record Photo: Penny LeLeux

The Tates operate their tour business year round Tuesday through Sunday and on Monday holidays. Tate says the best times for gators are when it is cooler, but not cold, so prime gator watching time is almost here.

Capt. Eli’s wife, Maria, is from Venezuela. “I love working from my husband,” she said. “I take care of in here (the office) and he takes care of out there,” she said as she motioned out the window to Capt. Eli preparing the boat to take to the launch.

“I love telling the people about all the beautiful places here in Orange,” she said.