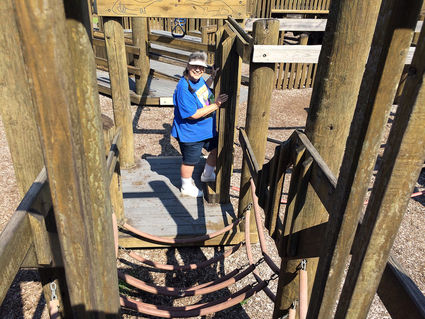 The City of Orange signed off on a 2020 budget Tuesday that includes more than $500,000 designated for improvements to Lions Den Park.

According to Cheryl Zeto, city finance director, that money is on a list of projects city council wants to undertake in the next several years.

She said that in addition to repairing or totally replacing the 20-year-old wooden playscape built by community volunteers in 1999, the money was earmarked for other projects at the city park bordered by Adams Bayou, MacArthur Drive and 16th Street.

Those will likely include replacing a covered picnic pavilion located next to the playground. Additionally, the park is home to the annual Lion’s Club Fall Carnival.

Zeto said Mayor Larry Spears has stated that he’s opposed to replacing the all-wood structure with cheaper playscapes like those purchased in recent years with CDBG grant money.

The mayor said that he’d prefer to add some more money from the 2021 budget to pay for fixing the playscape that previous city governments pledged to maintain, she said.

Spears was absent at Tuesday night’s council meeting because of the death of his father.

Estimates on the cost to build another all-wood playground on par with the Lions Den project run from $600,000 to $750,000. Kelvin Knauf, acting city manager, said during early budget workshops that a metal playground like those at other parks could be erected for about $200,000.

Patrick Pullen, mayor pro-tem, ran Tuesday’s meeting in the absence of Spears and all votes were 6-0.

It’s a boost of 8% over the effective tax rate, the most allowed by the state of Texas without voter approval.

The only proposal that did not pass was one to limit the amount of accrued vacation hours the city must pay out to a retiring employee.

In the budget process, council members agreed to allow employees to accrue five or six weeks of vacation if they had been employed 15 or 20 years.

Noting he will be replaced Oct. 1 by new City Manager Mike Kunst, Knauf gave his final report as acting city manager, stating that the city was aware of 41 homes in the city that were damaged last week by Tropical Depression Imelda.

He said most were in Hillbrook Estates, north of Interstate 10 and Martin Luther King Jr. Drive, and on the south end of White Oak Lane.

Edward Hawthorne lived in Hillbrook Estates for 15 years and says his old neighbors are hurting after experiencing flooding twice in 25 months with Harvey and Imelda.

He said all local governments should divert all of their efforts to fixing drainage.

“We’re talking about building a [Boat Ramp] Pavilion,” he said mentioning one pet city project. “Let’s hold off and put all our efforts into improving the drainage.

“People my age are saying, ‘Forget about it. I’m gone.’ We’re going to lose our tax base if we don’t fix our drainage.”