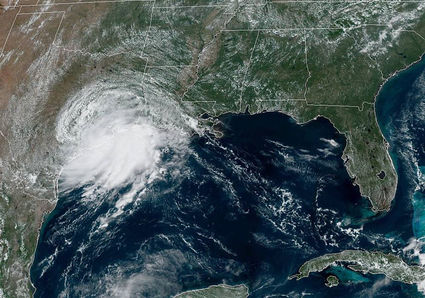 “Skated” was the word most often heard in the aftermath of last week’s Tropical Depression Imelda.

Unless you were among the unlucky ones that didn’t.

Seven out of eight City of Orange city council members and employees polled Monday night escaped home flooding from the storm that dumped more than 20 inches in a 24-hour period on much of the county, more than 30 inches on some.

Jennifer Krummel, assistant to the city manager, was near tears, however.

“For the last six weeks, I’ve bragged to all my friends that I wasn’t having to brush my teeth over the bathtub anymore,” said the resident of the Cedar Ridge subdivision on Highway 62, near Mauriceville.

She had just finished renovation of a home submerged two years ago in the nation’s worst recorded rain event, Tropical Storm Harvey.

Imelda ranks No. 5 all-time. While Harvey was credited with 60 inches of rain over a four-day period in 2017, Imelda produced 31.68 inches of rain overnight Sept. 18-19 on Mauriceville, according to meteorologist Patrick Vaughn. The total was more than 40 inches in western Jefferson County.

“I’d have bet anything that I’d never see another flood like Harvey,” Krummel said.

Among the many things canceled or postponed by Imelda were the Lions Club Fall Carnival, which was supposed to start its two-weekend run Wednesday, and Tuesday’s county commissioners’ meeting.

The carnival has been pushed back to the weekends of Oct. 16-19 and Oct. 23-26 and the commissioners will meet Thursday morning at 10 a.m.

They were going street to street personally verifying online damage assessments. Additionally, teams from the county in Sheriff’s Office and Road and Bridge Department vehicles will be out documenting damage by taking photographs and using drones during the day.

Ardoin said his unofficial count was up to 2,000 homes with water damage, most occurring west of FM 1442, with the worst flooding in Vidor, and the Mauriceville and Orangefield communities.

“The community is dealing with massive flooding,” Stephen Patterson, Orangefield schools superintendent, said. “Our schools haven’t flooded but lots of people have lost their home again.

With their school district not returning to class until Thursday, Orangefield officials were unable to offer numbers on students and teachers whose homes were flooded.

Ardoin said that although Gov. Greg Abbott declared a state of emergency for 13 Texas counties, including Orange County, FEMA would not offer assistance until it had verified $37 million in storm damage.

“We need $37 million and change to reach the threshold to be declared a national disaster,” he said. “As of yesterday [Monday], we were at $27 million.”

Orange County has asked all citizens to self-report their damages and complete the online Imelda Damage Survey on the county’s website at www.co.orange.tx.us .

The survey will not register citizens for FEMA, or replace a personal insurance claim.

The Greater Orange Area Chamber of Commerce is asking local businesses to report damage at 409-883-3536.

The Orange County Economic Development Corporation is asking all county businesses that sustained damage to contact its office at [email protected] with the following information: 1. Name of business and location; 2. Estimated cost of damages; 3. Were damages insured?

Kelvin Knauf, acting city manager for the City of Orange, reported they had 41 cases of home flooding in his city. Most were north of Interstate 10, near Adams Bayou.

Tommy Clary, who led a post-Harvey call for cleaning out the Bayou, points out that the de-snagging going on now is not nearly the same as the dredging that took place regularly through the mid-50s.

But he “skated by” with Imelda’s waters coming a quarter-inch from soaking his flooring, he said.

“Everybody below me in our subdivision flooded again, and a whole bunch of them said, ‘That’s it. We’re out of here.’”

Quick checks early this week with the cities of Pinehurst and West Orange came back negative for home flooding.

“I don’t think the damage is too high,” said Robbie Hood, city administrator for Pinehurst. “However, the way I feel is if one house got water in it, that’s more than should have.

“My heart goes out to our citizens.”

“Our city employees protected a lot of properties by blocking off the roads and kept people from entering and pushing water,” he said.