Photo: The Mustang defense swarms Bridge City's quarterback Ethan Oceguera. The Chain Gang forced the Cardinals to throw the ball and were able to keep them to 173 total yards in the 46-7 win this past Friday night.

Gerry L. Dickert For The Record

In a cross-county matchup, it turned out to not be much of a matchup at all. West Orange-Stark rolled into Bridge City this past Friday and dominated for a 46-7 win at Ward Stadium.

After both teams traded turnovers and unsuccessful fourth-down attempts, the Mustangs finally got on the board midway through the second quarter. After stuffing the Cardinals offense on a fourth-and-1, WO-S went 65 yards in six plays, capped by an 11-yard touchdown run by JaQuailon Chaney. He finished the game with 11 carries for 84 yards. Jerren Terrell scored the two-point conversion for an 8-0 Mustangs lead.

The Cardinals turned the ball over on a fumble, collected by Mustang Dontrey McClain. Just four plays later, Elijah Gales ran 19 yards to give the Mustangs a 15-0 lead with 3:46 left in the first half.

Bridge City showed some life on offense on its next possession, highlighted by a 64-yard pass from Ethan Oceguera to Colby Collins, setting up the Cardinals at the WO-S 12 yard line. Andy Lara eventually took it into the end zone from the 5 yard line, closing the gap to 15-7 with just over two minutes left in the first half.

The Mustangs took advantage of the time they had left in the second quarter, marching 51 yards on seven plays for a 31-yard field goal by Angel Ibarra, putting WO-S on top 18-7 at the break.

It wouldn’t take long for the Mustangs to strike again as the third quarter started with Terrell hitting Jalen Thompson for a 50-yard touchdown pass and a 25-7 lead with just 25 seconds gone in the second half.

After the Chain Gang stopped the Cardinals on their next possession, the Mustangs went to work again on offense, going 55 yards in 10 plays for the score. Terrell ran it in from the 15, giving WO-S a 32-7 advantage. The Mustangs kept their foot on the gas, pushing it into the end zone once again with Gales going 38 yards for a 39-7 lead with 6:42 left in the third.

After another Cardinals turnover, Terry Harris scored from the 5 yard line for a 46-7 final advantage.

Gales finished the game with 117 yards on 14 carries, while Chaney had 11 carries for 84 yards for the Mustangs. Quarterback Terrell was 12 of 19 for 137 yards, adding seven carries for 58 yards.

Bridge City was led by Oceguera who was 4 of 10 for 74 yards passing, running for another 61 yards on 14 carries.

The Mustangs welcome Jasper for the final non-district game of the year for both teams. Bridge City gets a bye week this Friday, returning for the start of District 11-4A play against Little Cypress-Mauriceville on Oct. 11.

There’s something about perfection that’s just downright beautiful and no one in Orange County is as gorgeous these days as the Orangefield Bobcats.

The Bobcats stayed perfect at 4-0 and 1-0 after winning their District 12-3A Division I opener against Buna this past Friday, 28-12.

It was a quiet first quarter for both teams as far as offense goes with Orangefield breaking the stalemate with just 4:30 left in the first half. But once the Bobcats found their momentum, they would roll off 21 straight points to put the game out of reach of the Cougars.

Kaiden DuBose accounted for the first touchdown on an 8-yard run with Gunner Jones’ extra point kick giving the Cats a 7-0 lead.

When the Bobcats’ defense stood strong, forcing Buna to punt, Orangefield’s special teams showed they could make some noise. Kent Micheal blocked the Cougars’ punt, returning it 45 yard for the score and a 13-0 lead.

Heston Puckett would score just before the halftime break, going in from five yards out. DuBose added the two-point conversion run, giving the Bobcats a 21-0 advantage.

The Cougars answered with a touchdown in the second quarter, cutting the Bobcats advantage to 21-6 heading into the break.

In the third quarter, Orangefield would add an insurance score, following Clayson Choate and a 50-yard run. Eventually the Cats moved to the 1 yard line and Puckett pushed it in for a 28-6 lead. He led the Orangefield ground game with 56 yards on 11 carries while Hunter Ashworth added 51 yards on eight carries.

With just over four minutes remaining in the game, the Cougars managed another touchdown to cut the Bobcats advantage to 28-12. That’s all the Coogs could muster, though.

Orangefield hits the road for a district game at Kirbyville this Friday.

Senior Ethan McCollum was everywhere all the time as he led Little Cypress-Mauriceville to a 29-14 win over the Hardin-Jefferson Hawks this past Friday night.

McCollum finished the game with 305 total yards of offense, including 179 yards passing and 126 yards rushing.

The Bears worked most of the first-quarter clock off the board, driving 65 yards with McCollumn grabbing the last three yards for a touchdown and a 7-0 LC-M lead.

The Hawks answered, scoring with just over 10 minutes to play in the first half when Sam Dickerson crossed the goal line from the six for a 7-7 tie game. 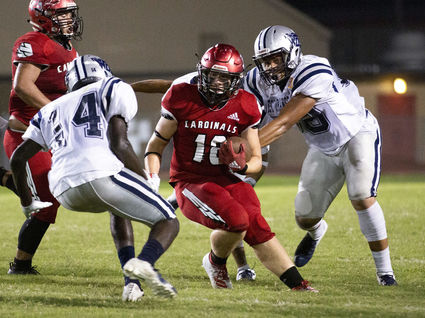 McCollum answered on the Bears’ next possession, splitting the Hardin-Jefferson defense for 55 yards and a TD to give LC-M a 14-0 lead. Another touchdown, this one by Landon Bearden, along with a two-point conversion by McCollum, gave LC-M a 22-7 lead going into the halftime break.

In the second half, it looked as though the Hawks had finally figured out its offense and started pushing toward the LC-M end of the field. A fumble, though, ended that threat.

One play later, McCollumn took off from the 18, going 82 yards for the final 29-7 advantage.

LC-M enjoys a bye week this Friday before starting District 11-4A, Division I play at home against Bridge City on Oct. 11.