To say that the International Brotherhood of Electrical Workers has been a huge part of George Crawford’s life would be like saying oxygen is important to us all.

The Bridge City native had a chance to reflect on his career, visit with the men he served and note the sweeping changes in industry at Saturday’s celebration of IBEW Local 2286’s 50th birthday.

“When we organized this locally in 1969, things were a lot different,” Crawford said. “Companies hired a lot more full-time staff. Unions were much stronger.

“Because of new technology and outsourcing, union membership began to shrink.

“But organized labor is still fairly strong in this area. IBEW has strong apprenticeship programs. Now, a lot of young people are going to technical school, as opposed to going to college and taking a chance they can get a job.”

Membership is about half of that now, even after a consolidation with Local 390, which represented construction linemen and maintenance electricians working for plants like Motiva and Huntsman.

Jon Gardner of Fort Worth, past vice president for IBEW International, was a union leader instrumental in the founding of an IBEW local at GSU, the Beaumont-based power company.

“IBEW have made very organized attempts to get into GSU over the years, but we could never get enough support,” Gardner said.

“The utility was represented by a local union. That’s what companies did to keep the AFL and CIO [nationally and internationally strong labor movements] out,” he said.

“Finally, the Communications Workers [union] got 30 percent of the workers to call for an election. IBEW just got the 10 percent we needed to get in.

“It was a four-way vote: for the local union, for CWA, for IBEW and no union. IBEW and the independent union were the two top vote-getters.

Not long after being chartered, the new union began negotiations with GSU for a new contract. They stretched from September 1969 to May 1970 and included 130 bargaining sessions.

In the middle, GSU fired two line crews in Baton Rouge for refusing to cross another union’s picket line.

“A spontaneous strike started in Baton Rouge and spread across the whole system,” Gardner said.

That ended up a 10-week strike resolved by a new labor contract.

The “big one” in Local 2286 history came in 1975, after the 1973 Arab Oil Embargo raised world oil prices by 400 percent had served to raise inflation and, thus all prices, for the global economy.

Local 2286 sought a large increase in pay to allow employees and their families to pay the higher prices.

The union workers were on strike for six months.

“We filed charges with the National Labor Relations Board after four and a half months, and they ruled the company was bargaining in bad faith,” Gardner recalled.

The company tried to end-run the union by inviting all employees to vote on a 15 percent raise.

Gardner and Crawford convinced employees to let their union continue with negotiations and the strike ended with the Local 2286 leaders winning a 31 percent pay raise for members.

“George got his feet wet during that strike,” Gardner said, “and we got a pretty fat incentive package.”

Crawford, still a full-time GSU employee, was on the negotiating committee in 1975. Shortly after, he was named union President of Local 2286 in 1976.

Three years after that, Crawford went to work for the Local’s members, spending the next 20 years as 2286’s business manager (also known as business agent or BA).

In 2012, Crawford left the Golden Triangle for a 14-year stay in Arlington, Texas, where he was on the international staff for the IBEW.

“I had a broad set of duties, including helping local organizations like 2286 help with training and negotiations,” Crawford said.

He and Linda moved back to Southeast Texas for good in 2016, after George retired.

Other highlights for Local 2286 that Crawford had a role in included the adding to the membership rolls workers from the River Bend Nuclear Plant near Baton Rouge and the Nelson Coal Plant in Lake Charles.

In 1994, GSU merged with Entergy. The New Orleans-based company couldn’t reach agreement with Local 2286 for a new work contract.

After promising no layoffs for the first couple of years, Entergy made it past that date and laid off 30 percent of its workers, Gardner said.

“In 1981, after [President] Ronald Reagan fired air traffic controllers on strike for their union, that opened the door to companies taking a tougher stance on organized labor,” Crawford said.

Crawford had gone on record in a couple of newspaper columns in 1983 and 1984 saying “A good labor-management relationship is what everybody needs.”

“George spear-headed the idea we don’t have to have an adversarial relationship, that we can get along,” Gardner said.

It wasn’t until 1997, several years after taking over locally for GSU, that Entergy reached what was termed “a reasonable agreement” with its workers.

Local 2286 negotiated with help from a “public campaign,” which used picketing of board members’ homes, reaching out to news media and appearing before the Public Utilities Commission. 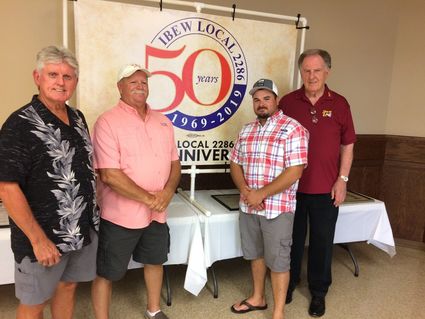 “We’ve had our battles, we’ve had our strikes. We’ve had to deal with poor labor-management relations,” Crawford said.

“But at the end of the day, having a strong labor-management relationship is the way to go. Smart leaders realize that.”

Besides the keynote speech by Gardner, another highlight of Saturday’s celebration was an appearance by Clinton “Bubba” Trahan of Hackberry, the Local’s BA since 2010, and Johnny Johnson of Buna, the incoming business agent.

“We’re passing the torch to the younger generation,” Crawford said. “Every generation writes its own history. Yours starts now.”