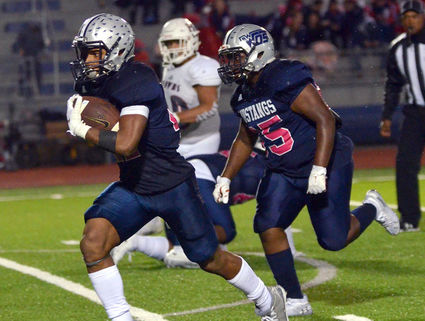 Photo: WOS sophomore Elijah Gales had a stellar night, scoring five touchdowns and rushing 176 yards. He was also 2 for 2 receiving and is the Mustangs' leading rusher for the season with 779 yards.

The weather finally cooperated Friday night so that the Mustangs could once again play on their new turf. And the boys definitely showed out as they beat the Hardin Jefferson Hawks, 49-12 in front of a small homecoming crowd.

The Mustangs have not played on their own turf since September 6, due to Tropical Storm Imelda, who cancelled the Crosby game, and a lighting storm that shut down the Jasper battle, before it ever got started.

Turnovers plagued the Mustangs in the first quarter, as the Hawks hit pay dirt first after a Mustang miscue around midfield early in the game. Mustang sophomore Elijah Gales answered back with his first of five touchdowns as the Mustangs were able to march down the field and punch it in from just two yards out.

HJ was able to capitalize on a fumble at the 11 yard line, but both extra points were no good as the Hawks led 12-7 at the end of the first quarter.

However, that would be the last time that the Hawks saw the end zone, as the Mustangs motored on to a dominant 28-12 lead at the half.

The Mustangs forced Hardin Jefferson to punt and three plays later, Gales made it to the end zone from 19 yards out. WO-S’ JaQuailon Chaney got in on the scoring as he ran 35 yards for six points. Gales scored the last touchdown on a 22 yard run.

Up this week for the Mustangs are the Liberty Panthers. The Panthers (3-4, 0-2) are coming off two district losses-Hamshire-Fannett, 24-36 and Silsbee, 14-38. Their wins were over Cleveland, Livingston and Huntington.

Liberty runs the wing T similar to that of Hardin Jefferson. They use two wings in brothers Terrick and BJ Peterson, who run sweeps and counters. Very rarely will they pass the ball. Their defense is young and their defensive leader is junior Jaydon Harris. BJ Peterson also starts at linebacker.

Tickets for the varsity game at Liberty must be purchased at their game the night of the game. Prices are $5 for adults and $3 for students.

The combined team of the ninth and JV groups beat Hardin Jefferson, 22-0.

Probably the most impressive play of the game was on the attempted PAT. Kicker Miguel Villeda lined up for the kick but the holder bobbled the ball.

Villeda took the loose ball and as he was being tackled threw the ball up to Dyklan Spencer who snagged the ball and scored for two.

The combined team will play Liberty at home Thursday night at 6pm.