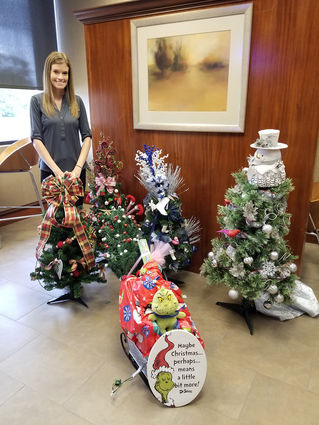 Photo: Jessica Prouse of Bridge City Bank is pictured with the Christmas Trees up for auction at that location. Be sure to visit the other locations to see all trees available. Silent auction bids accepted through Dec. 6. RECORD PHOTO: Penny LeLeux

It’s already looking like Christmas in several Bridge City businesses where the Bridge City Chamber of Commerce has silent auction Christmas trees on display. Money raised will be used for scholarships benefitting both Orangefield and Bridge City High School seniors.

“We give a minimum of $2000 in scholarships each year and we hope to raise at least that much,” said Barbara Jane (BJ) Hanneman, executive director of the Bridge City Chamber of Commerce. “We have 17 trees total on display at Bridge City Bank, City of Bridge City, Sabine Federal Credit Union and Wellspring Credit Union.”

Trees range in size from three to five feet and come in a variety of themes to delight everyone including: The Grinch, Houston Astros, Santa’s Workshop, Dallas Cowboy’s Cheerleaders, Houston Texans, traditional Christmas, whimsical and others. Starting bids range from $25 to $600 and some trees include gift cards, toys, and more.

Bids on the trees will be accepted through Dec. 6.

The chamber’s 11th annual Christmas Light Parade is scheduled for the following day, Dec. 7. Applications are being accepted now for vehicles and floats for the parade.

“This year is extra special as it falls on Pearl Harbor Day and our theme is Red, White and Blue Christmas,” said Hanneman. “Our parade marshal will be announced next Tuesday.”

“We have a new parade chairman this year - Scot Shaffer” said Hanneman. Shaffer posted on Facebook recently they were accepting donations of leftover Halloween candy for the Christmas parade.

“We provide the candy for Santa and it gets very expensive. We appreciate any donations,” confirmed Hanneman.

“Santa and Mrs. Claus prefer unbreakable candy because candy canes, lollypops and things like that shatter when they hit the ground and it leaves a mess.”

Don and Angie Breaux have been Santa and Mrs. Claus for many years now according to Hanneman. Angie is the librarian at the high school. 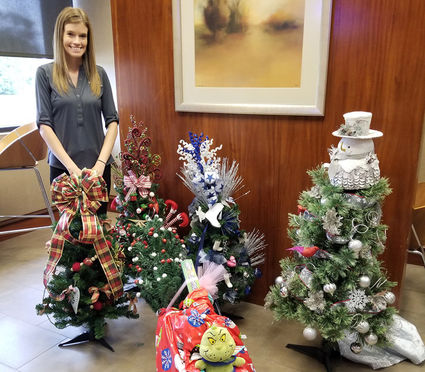 The parade will begin at 6:00 p.m. The best themed entry will receive the Mayor's Trophy and a $200 prize from Mayor David Rutledge. First, second and third place trophies will also be awarded in these categories: Float, Ambulatory, Dance, and Vehicle. The parade route will remain the same as previous years, starting at the First Baptist Church on West Roundbunch Rd. ending at Bridge City Intermediate School.

Applications to be in the parade will be accepted through December 2nd and are available online at http://www.bridgecitychamber.com or at the chamber office located at 150 W. Roundbunch. Entry fee for the parade is a donated toy from each participant. The toys collected will go to the Bridge City/Orangefield Ministerial Alliance for their Christmas assistance program.

For more information on the auction or the parade, call the chamber at 409-735-5671 or visit the chamber website at http://www.bridgecitychamber.com.