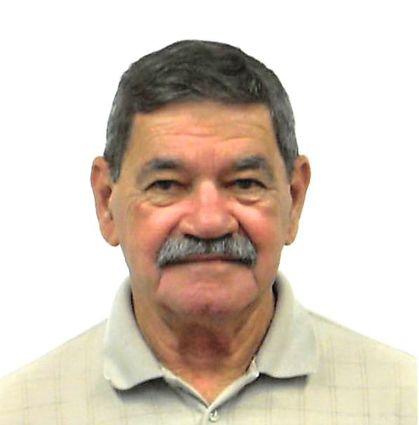 Officiating will be Father Steve Leger.

Burial will follow at Hillcrest Memorial Gardens in Orange.

Following the Rosary, there will be a sharing of memories by Morgan Doucet, Aaron Doucet, Gina Mannino, Damon West, Todd Doucet, and Rodney Balsomo.

Steve proudly served his country in the U. S. Navy on USS Ranger.

He went on to work as a carpenter for Texaco, which later became Huntsman Chemical.

Steve was also the union representative for OCAW. He was a faithful member of St. Henry Catholic Church for 43 years.

Steve was very involved in the Catholic Youth Organization, and taught Confraternity of Christian Doctrine (CCD) for many years.

He served as a Eucharistic Minister for Pope John Paul when he came to San Antonio, Texas.

Steve and Mary recently visited Italy and he enjoyed being able to see Pope Frances.

He was a certified volunteer chaplain at the Mark Stiles Prison.

Steve loved to minister to and help the prisoners, but they also helped him and changed his life forever.

He loved Jeeps, going to the beach, collecting coins, cooking, and joking around.

Steve was the happiest when he was surrounded by his kids and grandkids.

He was preceded in death by his parents, Gaston and Marie Doucet; and his infant daughter, Jennifer Dawn Doucet.

He is survived by his loving wife of almost 54 years, Mary Francis (Menyeard) Doucet; his children, Joseph Todd Doucet and wife Leigh of Llano, and Eric Gaston Doucet and wife Kindel of The Woodlands; his seven grandchildren, Addison Doucet, Aaron Doucet, Dr.

In memory of Steve, contributions can be made to Kolbe Prison Ministries, Criminal Justice Department, 710 Archie, Beaumont, Texas 77701.