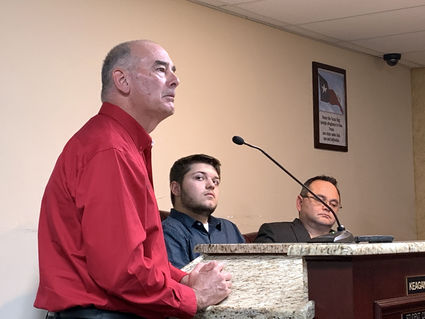 Photo: Troy Johnson, Judge of the Orange County Court At Law No. 2, appeared before Bridge City Council Tuesday night, asking audience and council members alike for their vote in his bid for reelection in 2020. RECORD Photo: Dave Rogers

City fathers are hungry for more. But the wide open spaces are getting fewer and fewer.

“That’ll be a few lots we got opened up,” City Manager Jerry Jones said after the approval of a preliminary plat for DeLeon Construction to build as many as 14 homes on a 4.6-acre tract dubbed “Silver Bridge Court.”

“Most all of the lots in Bridge City are built up,” Jones said. “There are a few subdivisions that are being built now, but a lot of the developers and builders are going around and finding the lots that are vacant in the older parts of town and building on those.

He and members of his staff supplied some examples, citing Center, Gilmer, Bland and Lake Streets and the Dugas addition as home to new construction.

“They’re building all over town,” the city manager said.

Before council’s vote on the Silver Bridge Court plat, Jones explained that the drainage plan for the property on Ferry Drive was approved by the Orange County Drainage District.

“It will have a detention pond on the end, so it will not add runoff to the area,” Jones said. “And, just in case, the pond is tied into the underground storm sewer there.”

Judge Troy Johnson appeared during the citizen comments portion of the meeting to ask those in attendance for their vote next year as he runs for his fifth term on the bench in the County Court at Law #2.

Johnson said his court, which opened in 2005, was created to handle a large backload of criminal misdemeanor cases.

The work will be paid for as part of the Texas Water Development Board Manhole Replacement Project.

An application packet for Hotel/Motel Taxes was approved.

“It’s to bring people into Bridge City and stay in hotels,” Jones said, “but that’s not the only thing.”