Lost in Translation: the challenges of working on a foreign film

Photo: John and Tammra Frederick were VIP guests Sunday at the US China International Film Festival in Houston.

John Frederick Jr. of Mauriceville has worked on many films in the last two years. One of them presented a few challenges along the way. Frederick submitted for a film called “The Moment” earlier this year that was to be shot in Houston. He received a request for a video audition. Everything seemed normal until he got the “sides,” which is film lingo for the lines they want you to perform in an audition. They were in Chinese. Houston, we have a problem. Frederick doesn’t read or speak Chinese.

He e-mailed Vivianna Wang, the writer/director of the film and let her know of his dilemma. She apologized and resent the sides in English.

“They didn’t really make sense when I got them, but I did the self tape as written,” said Frederick. He got the part. The entire script was in Chinese. Frederick pointed out to Wang that the English translations of his part did not make sense. “People don’t talk like that,” he told her. She let him take the lead on the translations to make it more accurate. There were even a few scenes he adlibbed that weren’t in the script.

He completed the shooting in July and the film went into preproduction.

Last week he received a VIP invitation from Wang to the US China International Film Festival in Houston that was held Sunday. It included a meal and awards ceremony. He thought it was the premiere of “The Moment.” Once again, there was a little loss in translation.

A trailer for an earlier film by Wang was what was screened. Wang had invited Frederick so he could network with producers and directors at the festival.

“Almost everyone was speaking Chinese,” said Frederick. He said she would spot someone and bring him over, they would speak in Chinese and then they would leave. He didn’t have a clue what was going on.

“The meal was interesting,” he said. There were lots of different dishes, “each with rice.” He said there were dishes with shrimp, several chicken dishes and beef.

He was confused as to what the etiquette would be since there was a plate with a smaller plate, and then there were different plates in the middle. He said he saw several women at the table go to a buffet table and bring back plates of food and others were food on their plates from those plates. He was unsure of if he was supposed to bring his plate to the buffet or if he was supposed to serve himself from the dishes on the table. It was a culture that he was unfamiliar with and wanted to be correct. When he asked a man near him, that fellow was also unsure and said he thought go to the buffet.

“I took my plate to the buffet area and an older Chinese woman came to me,” he said. “No, no, we bring to you,” the woman told him.

He told his wife, Tammra, “Just eat a little and I’ll take you to dinner after we leave.” It wasn’t that he didn’t like the food, he just wasn’t sure of the protocol. 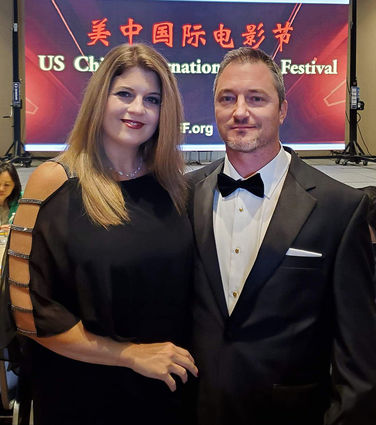 There were several films screened, all in Chinese. Only one had English subtitles. Then it was time for the awards ceremony.

“It was different for sure. I didn’t understand most of what they said, but there were lots of awards given out. We just clapped when everyone else clapped,” he said. I met a few people but didn’t know who they were. I guess my movie will be at the next festival.”

The way home required a drive through Whataburger. No translation needed.