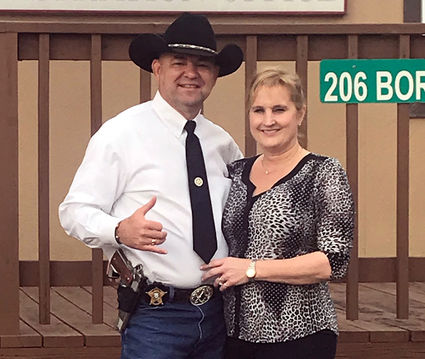 Photo: Lane and Michelle Mooney are pictured after Mooney officially filed for the office of Orange County Sheriff.

The worst-kept secret in local politics is now openly campaigning to be the next Orange County Sheriff.

A state law kept Lane Mooney from announcing until early December his desire to be the one to replace retiring Sheriff Keith Merritt.

But the Vidor native and current Precinct 4 Constable isn’t hiding his intentions anymore.

“The decision to be Sheriff is not one I made on a whim,” Mooney said. “My whole career I’ve wanted to be Sheriff of Orange County.”

Mooney’s desire to be Sheriff doesn’t make it a done deal. He will be running against current Sheriff’s Lt. Rob Strause, himself a former constable, in the March 3, 2020 Republican primary.

Because no one registered for the job from the Democratic Party, the primary winner will go on to take office Jan. 1, 2021.

Mooney, 55, would, by law, have been required to resign from his position as Precinct 4 Constable if he had made a public announcement of intent to run for Sheriff with more than a year and 30 days left on his four-year term as constable.

“If I’d have made an early announcement, I’d have had to quit the people of Precinct 4, and I wasn’t going to do that,” he said.

“I’m a man of the people and I’m a duty-bound individual.”

A graduate of Vidor High and a member of the First Baptist Church in Vidor, Mooney has been in law enforcement since 1988, he said.

He worked for the Vidor Police Department, then as a deputy for the Orange County Sheriff’s Office.

“In my career, I worked my way up from patrol, to the Orange County SWAT Team. I was assistant team leader there.”

Mooney is most proud of his work for the Texas Narcotics Control Task Force. He says he was a K-9 handler, and a team leader and operator for the Task Force.

“I’ve honed my craft mostly in narcotics, but I’ve been a patrol sergeant. I’ve had leadership roles,” he said.

Besides his job and church, Mooney owns a couple of Vidor businesses – Mooney Boys Brazilian Jiu Jitsu and Giant Pest Control – and is active in the Vidor Chamber of Commerce.

He’s also a non-commissioned officer in the Texas State Guard.

“I do a lot for the community,” he says. “I’ve helped set up shelters. I’ve done a lot of search and rescue. I’m involved in the community.”

He and wife Michelle have been married 33 years. They have two sons, Marshall and Matthew.