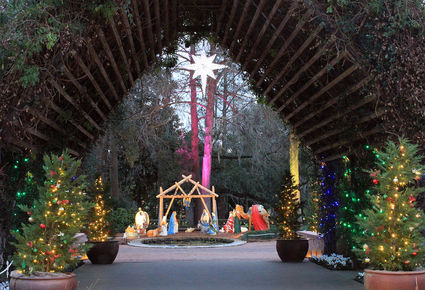 Photo: Shangri-La Botanical Gardens & Nature Center, lit up here during last week’s Christmas Strolls, is one of four cultural venues operated by the non-profit Stark Foundation, which has a mission of encouraging education and enriching the quality of life in Southeast Texas.

Shangri La’s annual Christmas Strolls set records for attendance this year and with it came record donations for the food bank at Orange Christian Services.

And nobody’s happier than Tad McKee, president and chief executive officer for the Stark Foundation.

“Our staff is committed to bringing quality of experience and improvement of quality of life to this area,” he said.

According to the staff of Rick Lewandowski, director of Shangri-La, more than 15,000 people passed through the front gate on the nine nights of the Strolls to see specially community-decorated Christmas trees and festive holiday lighting across the grounds of the 250-acre botanical garden.

Shangri-La is just one of four cultural venues operated by the Nelda C. and H.J. “Lutcher” Stark Foundation, which was founded in 1961 with the mission “to encourage and assist education and enrich the quality of life in Southeast Texas.”

The W.H. Stark House, home from 1895 to 1936 of W.H. “Bill” Stark and Miriam Lutcher Stark, Lutcher’s parents; the Stark Museum of Art; and the Frances Ann Lutcher Theater for the Performing Arts are the others.

And the Miriam Lutcher Stark Reading Contest has been awarding scholarships to local high schoolers since 1904.

Stark Park, a plaza just west of Stark House, annually plays host to Art in the Park and other local events.

The Stark family has long been among Texas’ leading philanthropists since Henry J. Lutcher moved from Pennsylvania to Orange in 1877 and set up the Lutcher & Moore Lumber Company.

Its sawmill employed thousands of Orange residents over the next half-century. Besides timber, investments in oil, land, art and other ventures created the foundation’s wealth, reported to be in excess of $400 million at the end of 2017.

Miriam Lutcher, the daughter of Henry Lutcher and his wife Frances, married Bill Stark, who took over the lumber empire after Henry Lutcher’s death.

H.J. Lutcher Stark, the Foundation’s namesake, was the son of Bill and Miriam Stark. The Stark House, their family home, is on Green Avenue, as is the Stark Museum of Art.

“They termed Green Avenue “Millionaires’ Row” because at the turn of the century [1900] there were so many who had gotten rich in the lumber industry,” McKee, a second-generation overseer for the Stark estate, said

“About the only ones who stayed here were the Stark and Brown families.

“During the Great Depression, Mr. Stark tried to keep people employed. He did an awful lot. And we want to continue that. We do have a lot of property we maintain that we want to commit to charitable pursuits.”

The latest available non-profit filings from 2016 and 2017 show the Stark Foundation with about $12 million per year in disbursements for charitable purposes while taking in about $300,000 in admission fees and memberships to the museum, Stark House and Shangri La.

In the middle of 2017, just before Hurricane Harvey hit Southeast Texas, the Stark Foundation announced it was dropping most admission charges.

“We’ve instituted free admission to all of our venues except the Theater,” McKee said.

“We have charged our venues with engaging the community and letting people in community know that every one of every background is welcome.”

With education being such a big part of the Foundation’s mission, children and school programs are permanent fixtures at the Stark venues.

“The museum increased its outreach to school kids over 50% this year. They’re touching a lot of kids,” McKee said. “Our Juried Student Art Exhibition encourages a lot of kids from the area to appreciate and experience art. We get 500 to 600 submissions from kids each year, and the top 200 we exhibit to teach and encourage kids how to express themselves.”

School buses are regulars in the parking lots ringing the Stark venues.

“We educate tens of thousands of school kids who go through Shangri La and Lutcher Theater,” McKee said. “On our dime, we hire educators to instruct these kids on fine arts, theater arts and nature.”

In addition to its top notch schedule of music and touring Broadway shows, the Lutcher Theater routinely offers Kids Shows on weekday mornings.

School-arranged field trips to the Lutcher Theater to give students a taste of the performing art.

There are six Kids Shows set for the first half of 2020, featuring a wide range of styles, everything from Shakespeare to Peter Rabbitt to George Orwell’s “1984.”

“We always book a series of high-quality touring shows for the kids and some of them have two or three performances during that day,” McKee said.

“We also partner with Kennedy Arts out of New York. They help train local teachers about drama and art about how to reach kids and educate them to the opportunities in theater.”

Along with the scholarships offered in the Stark Reading Contest, the Foundation has a large partnership with Lamar State College Orange.

“We are very committed to breaking the cycle of poverty in this area. We feel like giving scholarships to first-generation kids will go a long way,” McKee said. ”We try to be partners with the city and the Chamber of Commerce in moving the community forward.”

Hurricane Harvey in 2017 and Tropical Storm Imelda this fall were the two worst rainfall events in Orange County history and the impact was felt at the Stark Foundation.

But Shangri La has been full-service since its Adams Bayou boat tours resumed in October. The Stark House reopened in time for Christmas tours after a third-floor water leak required a lengthy fix for the restored 14,000 square foot mansion.

“We also installed fire arresters at the Stark House. Lightning has hit there three times in the last 10 years,” McKee said.

After the completion of a new 15,000-square foot Walter Riedel Education Center next to the Museum of Art in 2018, the Stark Foundation CEO says no new construction is in the immediate plans.

But a reforestation of downtown Orange by the Foundation is in progress, thanks to the planning of Lewandowski and the donations from Bob Thibodeaux of Bob’s Tree Preserve in Church Point, Louisiana.

The second half of 2019 saw the transplanting of several 20-year-old, 30-foot tall Southern Live Oak trees to new homes along Green Avenue.

The trees, weighing nearly 15,000 pounds each, were planted on Stark Foundation properties to promote a sustainable future for trees in downtown Orange.

“Plans are to bring in 20 to 25 trees over the years and repopulate downtown in live oak trees,” McKee said.

Lewandowski called the trees, that are expected to last for hundreds of years and grow canopies 100 feet across, “perfect trees for our Gulf Coast community.”

“We’re doing an awful lot,” McKee says. “Our staff is world class. We advertise nationally to get the best people we can down here to give the best.”

One thing you can’t get from McKee is a New Year’s resolution.