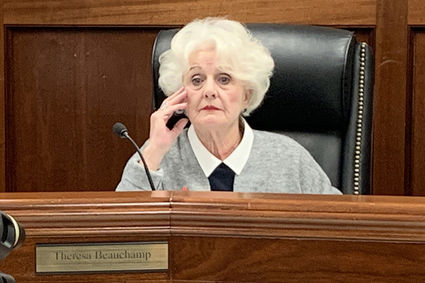 It was all smiles in the Orange County Commissioners’ courtroom Tuesday.

Kurt Guidry, county maintenance director, presented the court’s members a couple of bids and they chose a contractor, Scarborough Industries, to repair the Precinct 2 office building in Mauriceville.

“I’m elated,” Precinct 2 Commissioner Theresa Beauchamp said a year and a week after she took office and inherited a building that had been flooded by Tropical Storm Harvey nearly two and a half years ago.

Beauchamp has had a temporary office in a county building on FM 1442.

“I share an office with a mechanic out in the Transportation depot,” she said.

But she’s been traveling her precinct far and wide and says Mauriceville is where she belongs.

“At first, I wanted it to be a little more central, like on Highway 62 or something,” said Beauchamp, whose district runs from Pinehurst to northwest Vidor at the sound end and north to Mauriceville and the county line.

“But before you get into something, you don’t know the true picture of anything. But once I got into office, I realized that’s where I needed to be.

“Not only me, but they also need that Sheriff’s presence up in Mauriceville.”

The Mauriceville building, on State Highway 87 just south of its intersection with State Highway 12, will once again serve as a substation for the Orange County Sheriff’s Office when its completed.

“They should be able to get started in a week or two. I think I’ll be in by spring, I really do,” Beauchamp said.

Currently, the building is gutted and ready for new flooring and Sheetrock, new doors and new restrooms.

But first a roof.

“The bid is more than the insurance, but it’s because the insurance payment did not include a new roof,” Guidry said. “But we need to put a new roof on.”

The delay in repairing the Precinct 2 building was in part due to a decision to seek FEMA reimbursement but because of the long delays associated with such grants, commissioners decided last fall to use the insurance funds instead.

As it came time to vote on a contractor, fellow commissioners Johnny Trahan, Kirk Roccaforte and Robert Viator and County Judge John Gothia joked with Beauchamp that the county couldn’t cover the cost override in this year’s budget.

The septuagenarian commissioner laughed with them.

“Now you know why I have gray hair,” she told the audience.

In other action Tuesday, commissioners agreed to use Republic Services to do final-destination hauling of debris from Tropical Storm Imelda, heard a report that repairs to Claiborne West Park were “moving fast,” and agreed to sponsor a bid by the Orangefield Water Supply Corporation to apply for federal grants.

The Orangefield area’s water utility is a non-profit and a taxing entity, such as city or county, is needed to partner with it in applying for, receiving and disbursing grant monies. Gothia explained the county would not be liable for any expenses incurred.