Photo: Ned Theall, leader of The Fabulous Boogie Kings which has proven to be one of the most enduring bands of all time, thanks to Ned Theall's refusal to let this legendary band fade into obscurity. The Boogie Kings has been performing for over 55 years.

The death of Ned Theall, 72, 10 years ago, had caught me by surprise. He had lived the nightlife of a musician for years and in time that takes its toll. Ned however, never smoked, drank, used drugs or abused food. I had been aware for many years of heart problems in his family history. My half-sisters, first cousins of Ned, fight the same problem that killed their father and Ned’s father – who were brothers at an early age.

Ned’s brother Skip and I were the same age, Ned three years younger, always just a couple of grades behind us in school. He had a younger brother, Gary, an attorney in Abbeville and a sister, June. His mother was head of the draft board in Abbeville.

After serving in the Air Force, Ned became a college music professor but his call was always to play and write music. Many years ago, after playing with the Fabulous Boogie Kings since the 1950s, Ned bought and managed the popular group. Over the last years we had visited about his hanging up his horn, which he played sparingly over his last years. Ned and the Boogie Kings put on a few “farewell” tours but he just couldn’t give it up. I can relate with that.

Ironically, just a couple of weeks before Ned died Gene Bourgeois (Jivin’ Gene) and I were visiting about those long ago Abbeville days. Gene spoke of spending time in the Cajun town while visiting his grandparents, who lived there. He said he was impressed at age 12 and 13 by the Abbeville boys who had so much talent and who he found to be cool. He recalled not only Ned but also Bobby Guidry, aka Bobby Charles, and Warren Schexnider, aka Warren Storm who played drums in his father’s band before launching his career. Bobby Charles had just written and recorded “See You Later Alligator,” followed by many other songs recorded by others. Ned brought his trumpet everywhere he went.

Gene became like a little brother to me. His mom and dad always put me up when I blew into Port Arthur. Gene learned to play a guitar that came from my boarding house roommate’s brother. While visiting Harry Waddell’s folks in Rock Island, his brother Tom gave Gene’s brother Kenneth a guitar. Gene picked it up and learned to play on it and as they say, the rest is history.

Gene and Don Ball attended Ned’s funeral in New Iberia. Ned died of an aneurysm Friday, Jan. 8, 2010 at 8:20 p.m. Don had spoken with him earlier in the day. He was shocked to learn a few hours later he had died. He described Ned as his best friend. When in the area Ned always stayed with Ball, a longtime music promoter.

Ned was best known as the longtime leader of the Fabulous Boogie Kings, the legendary Hall of Fame “blue-eyed soul” band. Ned dedicated his life to a body of work that will not soon be duplicated or surpassed. His incomparable talent lent itself to the genius that was Ned Theall. Through his horn, composing and arranging, he created a sound that was the soul of Louisiana which was his gift to the fans and musicians worldwide that he touched and inspired along the way. He wrote such songs as “Philly Walk” and “I Love That Swamp Pop Music.” He is remembered as one of Louisiana’s great musicians. He truly was the Boogie King.

Through the late 1950s and 1960s the band played every Saturday night at the Big Oaks Club on Interstate 10 near Orange. The band built a large following. Janis Joplin was a great fan. They entertained on the beach in Galveston every Sunday where they drew thousands of youngsters from Orange, the Houston area and into Central Texas. The band later played throughout the country with long engagements in California and Las Vegas and recorded more than 20 albums and 200 songs.

I was surprised that Ned’s military rites were not conducted in Abbeville because that’s where his roots ran so deep. He is survived by his wife Rene. He left four children and several grandchildren.

Ned was a rare talent. I had known him all of my life. Often when he was in the area he came by the office to visit. He’s the first of a very talented group of young men to die who started their brand of music in our little Cajun town. Bobby Charles, who wrote hits for Fats Domino, Willie and other stars, died a few years ago in 2010.

Another friend done gone. No one I’ve ever known could blow a horn or sax with that distinctive sound as Ned could. His music will live on but his talent is missed and all of us who traveled Down Life’s Highway together are proud to have known him. Jerry LeCroix, another great musician, entertainer and real showman, was also a longtime member of the Boogie Kings. Jerry died May 24, 2017. Other Abbeville area music stars are Rockin’ Sidney, Al Terry and Sammy Kershaw. 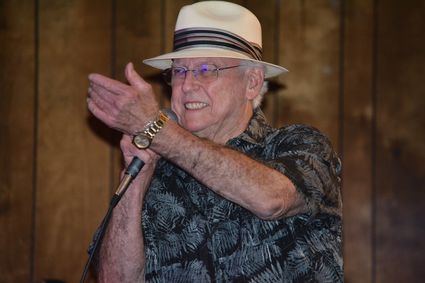 Jivin’ Gene ( Bourgeois ) was younger than the Abbeville boys, but knew them and was influenced by their music. He still entertains today.