Photo: Chris Kovatch, who runs the Orange Grove project for the Greater Orange Chamber of Commerce, reports that more than 100 of the half-ton sculptures have been sold so far and more will be arriving each weekend.

Like “those little weirdo things in their flying machines” in a 1967 song about an alien invasion, big, overweight oranges 2-1/2 foot tall have landed all over Orange, Texas, and have staked out prime real estate in front of the city’s merchants.

But they’re here for good – both in purpose and in perpetuity. At 1,130 pounds, more than half a ton, the sculptures are in no danger of being shoplifted.

Collectively, they are called the Orange Grove by the Greater Orange Chamber of Commerce, which sponsors the countywide program to sell and place the oranges to promote pride and beautification.

Chris Kovatch, the Chamber board member who actually set up and manages the project, says that soon a smaller, residential-sized Orange Grove option will be on sale for homeowners.

“In the middle of this year, once we get through Bassmasters for the Chamber [the fishing tournament is May 30-June 1], the plan is to work on a residential version that is significantly smaller. It’ll be the size a person can carry, that people can have in front of their homes.”

“Those come painted and they have been extremely popular,” Kovatch said. “As soon as we get them in, they sell out in a couple of days.”

The Chamber should get its next paperweights to sell later this month, he said.

The big oranges sell for $250 to Chamber members and $500 to non-members. So far, about 40 of the sculptures have been placed about town and another 70 have been ordered to put the current total at 110.

That’s a lot for a project that isn’t even a year old, but Kovatch said recently the goal is to sell 300 or more, to top the number of tomato sculptures displayed by businesses and residents in Jacksonville, Texas, the self-proclaimed “Tomato Capital of Texas.”

“The Chamber’s actually discussed a promotion like this for a number of years. It just never came to fruition,” said Kovatch, a senior vice president at Bridge City Bank.

“We began discussions again last year, and I said, ‘If ya’ll don’t mind, I’ll take it and run.’ The Jacksonville Chamber of Commerce pointed me to the guy who did the sculpting for their tomatoes and the company that builds the mold for the tomato and does the casting.

“We rolled it out before we had a picture of the sculpture, and we did it on purpose, to build interest and anticipation.”

Every week, new unpainted oranges appear and the people who bought them can be seen painting them – either the standard orange color or with their company logo or other identifying feature.

“We’re starting to see some more of those creative ones with an artsy take on it,” Kovatch said. “I love seeing the traditional ones, but I can’t wait to see the creative ones.”

The banker and fellow Chamber board member Brad Childs undoubtedly sees oranges in their sleep. 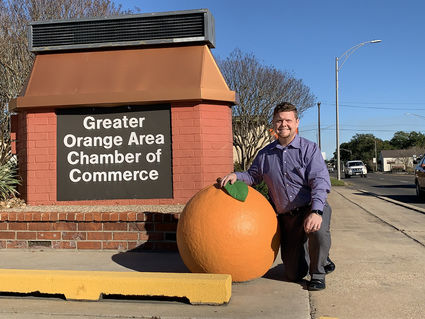 Childs, owner of Childs Building Supply, volunteered to deliver and place the sculptures, which are delivered on pallets, each weekend.

“Brad came up with a sling idea and used it to lift them off his truck,” Kovatch said. “When we get to different locations, he uses his forklift to lift them onto the ground. Without Brad, I don’t think we could do this.

“We have volunteers who help get it into the place that’s most visible and set it down.”

The Chamber’s Lauren McGee charts the progress of the Orange Grove with an online map of each sculpture’s location available on the Chamber website.