Expect a go or no-go investment decision to come from the petrochemical giant at the end of this year or early in 2021, said Chaney Moore, real estate and property manager for Chevron Phillips Chemical.

And even before that, don’t be surprised if you see preliminary work taking place on the 1,700 acres of land between Texas 87 and Farm to Market Road 1006.

“We may do a little groundwork before that [investment decision], clearing and things like that, so when time comes we’ll be ready to move ahead,” Moore said.

Already, the company has leveled several buildings on the property.

Jessica Hill, executive director of the Orange County Economic Development Corporation, said the company had already spent $60 million on land and it will generate $100,000 in this year’s taxes just because the previous owners’ agriculture tax exemptions came off the property.

She said construction is expected to take five to six years and Chevron Phillips Chemical is expected to increase the property’s taxable value to at least $200 million and as much as $400 million before the tax abatement begins.

That tax value at the start of the abatement period will dictate how much in yearly tax payments the company will send to Orange County during that 10-year period.

At the current county tax rate of 54.2 cents per $100 property value, that payment would be anywhere from $1.1 million a year to $2.2 million a year during the course of the abatement.

Hill said that besides land costs, Chevron Phillips Chemical is expected to spend $50 million on business personal property and $100 million on taxable inventories.

She said direct net benefit to the county during the plant’s first 20 years should be over $170 million, with estimated total payments to West Orange-Cove being $515 million.

It turns out plans for the plant structure have most of the taxable value going to the half of the land inside the WOC school district.

“Bridge City ISD should recognize as much as $100 million of additional value,” Hill said. “The city of Orange, Drainage District, the port, all communities will see that benefit.”

The agreement includes a requirement, Hill said, that Chevron Phillips Chemical agrees to give preference and priority to local manufacturers, suppliers, vendors and labor, to add local contractors to its approved list and participate in job fairs seeking local labor.

“As a result of joint efforts to utilize local sourcing, the economic impact for businesses in the area totals over $5 billion during the construction phase.”

In her presentation to court members, she said plant construction “will created as much as 10,000 construction job opportunities.”

Seven members of the public spoke during citizen comments at the beginning of Tuesday’s meaning. Two of those opposed the Chevron Phillips Plant, with World War II veteran Robert Rothrock recalling being born in refinery housing in Fort Worth in the late 1920s.

Robert Currie of Innovative Air Solutions of Orange said, “Everybody forgets that during World War II, we had over 100,000 in this town. Why won’t it support an extra 10,000 now?”

Maureen McAlister, chairman of the Greater Orange Area Chamber of Commerce, talked about trickle-down economics and “the multiplier” used by economists to track a dollar’s impact on a community.

“Call it what you want. I call it a win-win for Orange.”

Commissioners moved the abatement vote up to the top of the agenda and Hill spoke for about 15 minutes. Then Chevron Phillips’ Moore, Stark Foundation CEO Clyde McKee III, Gopher Industrial owner David Jones and Travis Woods of the Gulf Coast Industrial Group followed her to the microphone, all speaking in favor of the deal.

“As big as DuPont was when it came to Orange, this will be bigger,” predicted Commissioner Johnny Trahan. 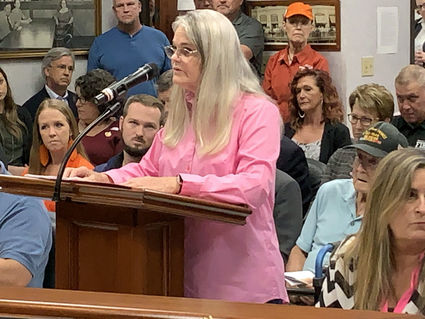 After Tuesday’s meeting, Moore said Chevron Phillips Chemical is still working out the terms of an agreement with joint venture partner Qatar Petroleum that was announced last July.

“We announced last summer we were trying to reach a deal with Qatar Petroleum. Once we have that out of the way, and a few other hurdles – internal approvals, what you call the final investment decision – we should know that some time around the fourth quarter of this year or the first quarter of next year.”