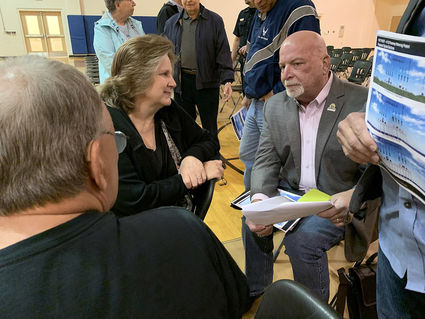 Photo: Orange City Councilman Brad Childs explains his opposition to the way the Texas Department of Transportation is dealing with the Adams Bayou Bridge in the department’s expansion of Interstate 10 from four to six lanes.

Orange City Councilman Brad Childs was not shy about voicing his frustration about reconstruction plans for the Adams Bayou bridge proposed by the Texas Department of Transportation.

At an informational meeting put on by TxDOT at West Orange-Stark Elementary Thursday, Feb. 20, plans were unveiled for completing the widening of Interstate 10 from four lanes to six across Orange County to the state line.

At a meeting a year earlier at the same spot, many citizens who feel the current “ground level” feeder road bridges on either side of the elevated bridge flood easily and cause snags that back up water on the north side of the Interstate were in favor of an “alternate version” that completely lifts the feeder road onto the overhead bridge.

But many at that 2019 meeting decried the removal of the turnarounds, saying without them, they couldn’t access their property and emergency vehicles would be forced to use turnarounds farther down the highway to reach their properties.

Thursday night, TxDOT unveiled a compromise design at the same WOSE cafeteria with redrawn schematics posted along the walls.

The service road traffic wishing to cross Adams Bayou can take the “high road” as an add-on to the existing elevated I-10 bridge.

And the turnarounds would be left for those homeowners needing them. Flood gauges would be added so drivers could easily see the depth of the water.

“I disagree with plans for the Adams Bayou Bridge,” Childs said at the public hearing in the school’s gymnasium, which was headed up by Adam Jack, TxDOT’s director of transportation planning and development.

“If you leave the Adams Bayou Bridge like it is, your turnaround will go underwater with six inches of rain. We would like that the bridge be rebuilt properly.”

Childs, owner of Childs Building Supply and Ace Hardware at I-10 and 16th Street, is one of a group of property owners who live near Adams Bayou that want TxDOT to tear down the current bridge and replace it with one like the one over Cow Bayou, a few miles to the west.

“Even with the service road bridges gone, you still will have 28 pilings into the water at Adams Bayou. There are no pilings in the water at Cow Bayou,” Childs said.

“And we are getting snags [on the pilings] every time it rains.”

“We do appreciate you taking out the feeder road bridges. We see that like a run batted in. A home run would be to rebuild the whole bridge.”

Bob Baptista, a North Orange resident who has spoken out often for the need for a new Adams Bayou Bridge saw the new presentation as a “wild pitch.”

“It’s just back to the original plan,” he said. “When they postponed this meeting in December, I thought there was a chance they’d adapt it to the Cow Bayou plan.

“But they didn’t. Orange got the shaft, again.”

Avant complained that he has no access to his property now when the turnaround is flooded.

Odegar said the entrance lane from the Texas visitor’s center westbound toward 16th Street was too short for trucks to build their speed to safely merge into traffic coming from Louisiana.

Terry said he was worried about how emergency vehicles would be affected by the change.

“To me, it’s a little dicey,” Terry said. “I’d like to see a bridge that looks like the Cow Bayou Bridge.”

During follow-up discussions with TxDOT officials and vendors who were stationed around the cafeteria to answer questions about the plans, Childs pointed out that the only way to keep the turnarounds from flooding was to raise their elevation and that was not possible without raising the main bridge.

He was answered by someone saying TxDOT was restrained by budgets, and besides, emergency vehicles could drive the wrong way down service roads to get where they needed.

The budget for this project has gone up from $47 million to $50 million since the informational meeting a year ago.

Childs advocated for TxDOT to “use your slush fund,” which he later explained.

“There’s a fund they have that they can go to to get the bridge finished the right way,” the councilman said.

“There’s a contingency fund for things you forget.”

According to a timeline shown during the public hearing Thursday, environmental approval is expected in the spring with construction set to begin in the fall.