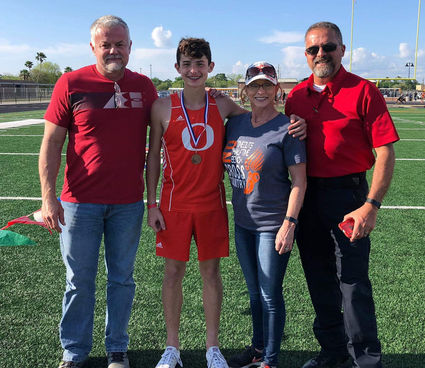 Photo: Sheriff candidate Rob Strause, left, ex-wife Janois Grizzaffi and her current husband, Mark Grizzaffi have teamed up in the life of Orangefield student Cody Strause and now Janois is helping her ex-husband in his political campaign.

Janois Strause Grizzaffi has worked for three different Orange County sheriffs but says she won’t work for her ex-husband if Rob Strause is elected this year.

That’s because she’s retiring in less than a month to be a full-time grandmother.

But she is helping Rob Strause run his campaign for Sheriff.

March 3, Super Tuesday, is election day. But early voting in the Sheriff’s race between Rob Strause, like Janois a deputy sheriff, and Precinct 4 Constable Jimmy Lane Mooney is ongoing through Friday.

Some may have been surprised recently to see the county’s veteran public information officer ask her online friends to vote for her ex-husband.

“My current husband and ex-husband are good friends,” she said.

“You know what people think is really weird? We all sit on the same row at church, and it’s Mark, me, either my son or my daughter, then Rob.”

Janois and Rob were married in 2002 and divorced 10 years later. Their son, Cody, is 15 and attends Orangefield schools. They all attend church at Bridge Point Fellowship in Bridge City.

“We were friends before we were married, and we’ve remained friends,” she said. “I think the main reason is Cody. We knew that whatever decisions we had made should not affect his upbringing.

“And I think Mark’s had a lot to do with it. Not many husbands would be supportive but I think it’s Mark’s love for me and my children that allows me to have such a mutual respect for Rob.

“There’s nothing wrong with having friendship and mutual respect.”

With no one having filed for county-wide office representing the Democratic party, Tuesday’s winners will face no opposition in November.

While the list of names are long on the party ballots for national and state offices, Orange County’s only five contested races are on the Republican ballot.

Besides the Sheriff election, county-wide jobs for 163rd District Court Judge and County Judge are contested, as are Precinct 3 elections for Commissioner and Constable.

In the hard-to-escape 163rd District Judge race, Michael Catt has now raised $33,228, including $21,000 in mostly $1,000 checks from Beaumont lawyers or their firms, and Rex Peveto has spent $33,959, according to Monday’s final pre-election campaign filings.

While Peveto is mostly self-funding his campaign, his Feb. 24 report acknowledged a $25,510 payment to DDM Marketing of Lumberton, his one-stop marketing shop.

In the Sheriff’s race, Mooney reported $15,284 in contributions for the period from Feb. 4 through 24, boosting his total reported fundraising to $24,695.

Big donations included a $5,000 check from Chad Havens and a $4,442 in-kind gift of television advertising from Brad Rutledge and Brad Taylor of Bridge City.

His report included a $2,500 contribution from the Houston-based International Union of Operating Engineers Local 250. It also showed that Gothia still has $22,223 of his contributions on hand, as of Feb. 24.

Bayard did not file a Feb. 24 report. His only filing so far listed no contributions and about $4,000 in political expenses paid from personal funds or by credit card.

Precinct 3 Commissioner Kirk Roccaforte also received support from Local 250, a $2,000 check, according to the latest filing.

Opponent Sam Carpenter marked his Jan. 15 report as final, showing $1,943 in expense and no contributions.