Photo: Delta Sigma Theta Orange Alumnae Chapter members, from left, Kim Franklin, Bettie J. Curtis, Margaret Adams, Linda Lee and Peggy Richard make plans to get the word out about the 2020 Census and how a response by all residents can make the city and surrounding area better.

It’s time to stand up and be counted, Orange County.

Or you can sit down and do it. You can even be counted while lying on your bed.

The 2020 U.S. Census has begun and Americans will begin receiving info about it in the mail next week.

But there’s no need to wait. As Bridget Johnson told members of Orange City Council and the audience at the city’s Tuesday meeting, you can grab your phone, tablet or computer and go online and fill out the short questionnaire in five minutes time.

The census is a count of every living person in the United States which is required by the U.S. Constitution to be conducted every 10 years.

It is against the law for the Census Bureau to publicly release your responses in any way that could identify you or your household. By law, your responses cannot be used against you and can only be used to produce statistics.

Those statistics are used by businesses to decide where to build factories, offices and stores. Local governments use the census for public safety and emergency preparedness.

The Orange alumnae chapter of Delta Sigma Theta is doing all it can to get the word out, partnering with the U.S. Census Bureau.

“In the last census, the city of Orange was very under-represented,” said Margaret Adams, the DST social action chairperson for Orange. “We began working Sunday, and we’ll be pushing this through the end of June.”

“Each pastor shared with their congregations that the census is coming,” she said.

Bridget Johnson is the Partnership Specialist for the Dallas Regional Census Center.

She said she’s also trying to establish partnerships with city and county governments and the Census Bureau is even suggesting challenges for groups to increase awareness and interest in registering.

Adams said the local DST members would ask the pastors for the number of member families in each congregation and give prizes to the congregations with the highest percentage of families responding to the census.

Johnson said the census tract of homes located south of Interstate 10 and between 16th St. and the Sabine River was one of the most under-reported in the 2010 census and is getting special attention this time around.

Nationwide, she said, more than 1 million children under age 3 were missed in the 2010 count.

“We want to count all the people in households, so we’re partnering with Delta Sigma Theta and other organizations,” she said. 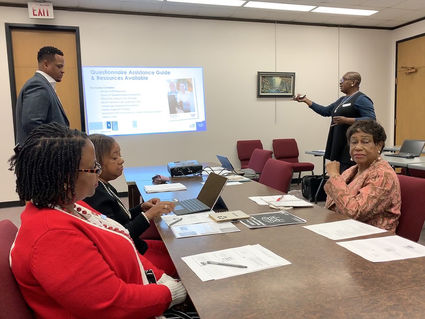 Johnson said mobile questionnaire assistance centers will be set up through partners. Adams said DST planned to do some link sales in target areas to attract crowds to sites where they could use computer devices to fill in their information.

Spears and city staffers brainstormed with Johnson and Adams’ group and suggested using a meeting room in the City building on Eighth Street. They suggested perhaps a census booth could be set up at city events.

The Census Bureau is currently hiring “census takers” it calls “enumerators” to visit the households that don’t register in the next couple of months.

“But we’re trying to get everyone to self-register, so we don’t need enumerators,” Johnson said.