Buses depart the Little Cypress-Mauriceville High School parking lot Tuesday morning, but instead of going to pick up students, they are delivering breakfast to the students. LCM, the only public school district not on spring break this week, suspended classes because of COVID-19 virus precautions. (Photo courtesy of Lindsey Frugia.)

The only people going to school in Orange County Tuesday were the little ones.

Tanya Sterling’s staff at Kids’ Castle daycare in Bridge City welcomed several dozen youngsters on the day a countywide disaster was declared in response to the worldwide coronavirus scare.

But Kids’ Castle was taking state-prescribed precautions sent out Sunday by the Texas Department of Health and Human Services.

“We don’t allow any of the parents in the building unless they have a legitimate reason to be in,” said Sterling.

“And so far, we haven’t come across any legitimate reason.

Before entering, each child is tested.

“We take their temperature before they come in,” Sterling said. “We pay attention for any symptoms of respiratory infections, if they’ve got a cough. We’re only allowed to let certain people in.

“Yesterday, we did deny four children.”

On Monday, Little Cypress-Mauriceville was the only public school district in Orange County holding classes and those were optional. Lamar State College, Orange, West Orange-Cove, Bridge City, Orangefield and Vidor school districts are all on spring break this week.

But LCM sent its students home Monday afternoon until at least April 6 after Texas Education Commissioner Mike Morath announced the cancelation of this year’s STAAR testing requirement and county leaders got the heads-up on the coming Orange County disaster declaration.

LCM and the other school districts have announced they will decided to implement a Flexible Education Program from Tuesday, March 17, through Friday, April 3.

State-funded school meals will be delivered to students’ homes during the outage. Tuesday morning, LCM buses ran their routes to deliver breakfasts, not pick up students.

According to LCMCISD, their FEP program will blend both online and traditional learning tasks, with the plan varying by grade level. The district plans to reevaluate the program on April 3, with a decision to continue the flexible schedule or returning to school the following week.

The districts all say they are hopeful of restarting regular classes April 6.

Sunday, the CDC advised banning gatherings of 50 or more for eight weeks. 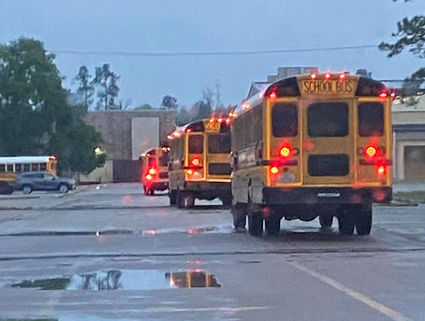 The University Interscholastic League, which oversees most high school athletics competitions and a number of academics competitions, announced Monday it has suspended all contests, practices and workouts through March 29.

If school were to restart in April, most UIL district seasons would be compressed in order to keep their original playoff schedule. The high school soccer playoffs have been pushed back to April with state championships set for the weekend of April 29-May 2.

Thomas Johnson, Lamar State College Orange, announced last week the school was extending this week’s spring break through March 27 in order to give faculty time to ready to teach students via flexible methods.

Johnson said it is hoped students can return to campus and regular classes by April 13.