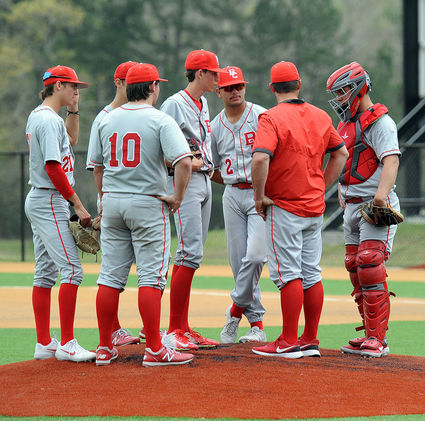 Photo: Bridge City head baseball coach Chad Landry meets with his state ranked Cardinals on the mound during the final game of the Jasper Tournament against Nederland on March 14. Big Red pounded Nederland 8-3. It would be the final game for the playoff bound Bridge City.

The COVID-19 viral pandemic has made the spring of 2020 one that no one will forget.

Meanwhile, the baseball players at Bridge City still haven’t given up their hopes of making vastly different memories.

Coach Chad Landry’s Cardinals were 15-0-1 and ranked No. 1 in the state’s Class 4A ranks when the University of Interscholastic League ordered a halt to Texas high school sports March 19 as the new coronavirus began to spread across the United States.

Unlike college sports, which put a permanent end to spring sports for 2020, the UIL has so far refused to wipe out the 2020 spring sports championship chase.

Texas’ governing body for school competition said in its latest (April 3) release, it is “further modifying contingency plans based on schools reopening May 4.”

“We’re just like everybody else, just biding our time,” Landry said.

The wait and uncertainty is a tiresome and nervous process.

“I can only mow the baseball and softball outfields so many times,” he said.

UIL rules do not allow him to work with his players.

Players can’t even hold their own small-group workouts, he said.

“You have to be 18 to be out of your house and you can’t be with anybody else that’s not 18,” Landry said, speaking of the Stay-at-Home, Stay Safe emergency orders in force in Orange County and much of the country.

“Honestly, I think there’s a lot of dads finding the old gloves. The kids are playing catch with their dads.

“We had a kid send us video of his dad hitting him ground balls in the front yard.”

The UIL allows coaches to send instructions for workouts to their players, but Landry doesn’t see the need.

“Basically, we’ve just been kind of leaving it up to our own guys,” he said. “We trust that they’ll get their work in.

“Mainly I’m just communicating with our guys, touching base to see how they’re doing, staying in touch with everybody.”

Bridge City’s team has four senior players who have signed letters of intent to play Division I college baseball next year and a fifth is a junior – Sam Carpenter III – who just accepted a 2022 offer from Lamar University.

“These guys have been together since they were 8 or 9, and they’ve been successful every year,” Landry said.

“Even going back to when they were freshmen, they kind of overachieved. Four of them started as freshman and we made it to the fourth round of the playoffs.”

Carpenter is the team’s catcher when he’s not pitching.

The Cardinals only trailed for four innings in their first 16 games. Their only non-win was a tournament time-limit tie with Nederland.

“Top to bottom, the numbers are kind of crazy,” Landry said. “It’s been fun.”

Landry has been coaching high school baseball for 18 years and says the only season interruption he can recall anything like this came in 2009, when schools were ordered to close because of the swine flu.

“In 2009, we only missed a week,” he said. “They cut the playoffs to one-game series and we played two rounds in one week.”

The coach said a survey of his peers revealed most said their teams would need about a week of practice before retaking the field.

If playoffs are scheduled two rounds per week, that’s OK.

“We’d rather play too many games than not play at all,” he said. “Our mindset is that we’re going to finish.

“These seniors have waited four years. They can wait three more weeks.”