John Gothia says when it comes to taking all reasonable precautions against the spread of diseases like COVID-19, Orange County won’t get caught by surprise again.

That’s why the county judge has directed Kurt Guidry, county maintenance director, to install protective see-through “sneeze guards” above the counters in the offices of the County Clerk, District Clerk and County Tax Assessor-Collector.

“What we do know is this thing isn’t going away. We’re going to be facing this again next year in some shape or form,” Gothia said of the coronavirus during Tuesday’s Commissioners’ Court meeting at the County Administrative Building.

“We cannot continue to shut the county down for two or three months every year when something like this comes up. We’ve got to have something in place for next year.

“When the flu season starts up again, we’ve got to be able to protect our citizens and our employees.”

As it happens, the clerks and tax offices aren’t open to the public now and won’t be for a while.

That has or may come to a surprise to people who were told or read from a county news release over the weekend that announced county offices would be reopening after they were completely closed for disinfecting after a Sheriff’s Office employee tested positive for COVID-19.

“We opened county offices up,” Gothia said, “but that was only to limited access, the way it was before,” the positive test was released April 4.

To be clear, the county posted a nine-page “quick reference guide” of the conditions regarding each county office’s “limited public access” on its Office of Emergency Management Facebook page.

The clerks and tax offices, for instance, are conducting business by phone, fax, email, regular mail, online and by e-filing. The tax office takes payments in its dropbox at the front door.

Marriage licenses are by appointment only and courts are conducting hearings over the internet; their jury trials have been suspended through June 22.

One county department doing big business during this month-plus coronavirus Stay at Home order is the county landfill.

Gothia said he was concerned that each visitor to the landfill had to interact with an employee to pay for the service.

Because of that, he suggested doing away with landfill charges until the end of this of virus threat.

Commissioners opened the meeting by voting to continue the county’s Declaration of Disaster in place at least until their first May meeting, on May 12.

The disaster designation will be important if the federal government authorizes repayment to local governments for expenses incurred because of COVID-19.

The commissioners also said they would approve free use of the landfill by county residents until at least May 12.

For its third meeting in five weeks, attendance in the commissioners’ courtroom was again limited to 10 people Tuesday. Department heads took turns in the room covering their agenda items.

Commissioners recognized receipt of $406,169 from the state Comptroller as its half-cent Sales Tax payment for February 2020. 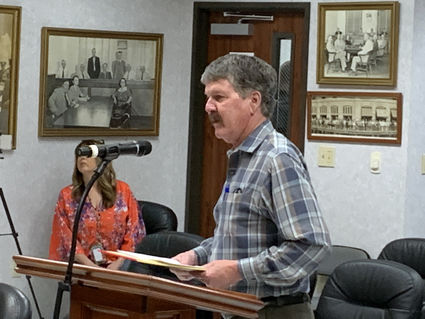 The county OK’d what Gothia said was the final payment to Wendorf, Beward & Partners for its services as grant manager after Tropical Storm Harvey, a check for $40,222.

Wendorf Beward handled the paperwork for more than $10 million in FEMA reimbursements. But Traylor & Associates won the competitive bidding for the grant management current contract.

Slacum presented commissioners with a list of road projects for the rest of the year. He asked each of the five to prioritize ones for their precincts.

“We don’t have near enough money to do them all,” Slacum said. “Every year, we work until the money or time runs out.”