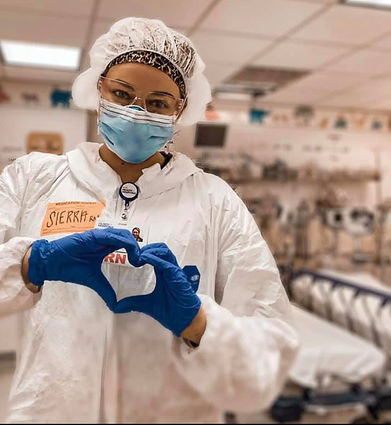 Sierra Roberts, a Bridge City native who is a registered nurse at Baptist Hospital Beaumont, just returned from a three-week duty at a hospital in New York City, the nation's No. 1 hot spot for the coronavirus and the deadly disease Covid-19.

Sierra Roberts ended her final day on the job the way she began her first.

She was holding up a cell phone so a family could say their final goodbyes to a dying patient.

New York City has been the nation's No. 1 hotspot for the coronavirus and the deadly Covid-19 disease it carries.

"I made the commitment when I became a nurse to go in head-first in these kinds of situations, and I've got to stick to that commitment," she said in a telephone interview Monday.

Her commitment also included a two-week quarantine at her home after returning to Texas.

Roberts was in the Big Apple from April 14 through May 5. During her three weeks there, New York City saw as many as 8,000 new cases per day and a total of about 8,000 deaths.

"I've been a nurse for three years, two in the emergency room, and it was scary for me," Roberts said.

"When I got there, I tried to picture the worst-case scenario. What I saw far surpassed that.

"Every open unit they had in the hospital was basically an ICU [intensive care unit]. Almost every patient was vented [on a ventilator], super, super sick.

"The week before I got there was probably the worst they had. That's when people were coming in at a super-alarming rate and they were basically dying because they didn't have enough resources."

Roberts worked for a large staffing agency that provided thousands of short-term employees to help bridge the gap between the usual supply of medical workers and the great need.

"Basically, there just weren't enough nurses," she said. "The New York City nurses were either getting sick or losing loved ones and staying home.

"One hospital only had seven staff members from the whole hospital show up. The rest of the workers were made up from agency nurses."

Roberts and her RN co-workers, at least five of them from Southeast Texas, took a leave of absence from their actual jobs to help out.

They were put up in top-rated Times Square hotels and meals and laundry were provided. But sightseeing wasn't on the agenda.

Roberts said she was delivered by bus to her hospital every morning at 6:30 a.m. and didn't leave the hospital until 8 p.m. most nights.

"I'd call Mom and Nana and we'd count down the days until I got to come home. Then I'd go to sleep."

Coney Island is in Brooklyn, which had the highest fatality rate of any of NYC's five boroughs, with between 9 percent and 12.5 percent of Covid-infected individuals dying. The rate in Orange County is about 2 percent.

Conditions for Roberts and the other nurses improved the longer they were there.

"We had to reuse a lot of the protective suits and masks for a couple of days when I first got there," she recalled. "They would give us one mask and a few days later, they'd give us another one. For a while, I had to rotate them out. I would Lysol my mask down, leave it in the sunlight and let it air out. I'd have another one to put on."

"A lot of PPEs came from donations," she said. "People in Southeast Texas sent me N95s [masks] and, at the end, I had one for every day.

"We had so many people [nurses] from Southeast Texas – five of us worked at either the Southeast Texas Medical Center, Baptist or St. Elizabeth. Donations came from all over Southeast Texas. They sent us cards, Lysol, PPEs, encouraging words to see us through it."

Roberts works in the cardiac catheter lab at Baptist, helping patients with emergency heart issues. She worked in the emergency room for two years before that.

"That's where I got my experiencing with it [death]," she said. "I know some of the nurses hadn't had that kind of critical care experience. We had to support them through it."

Many of the nurses that answered the call to NYC had ill-fitting resumes – some had only worked in drug rehab hospitals – but they adapted.

"Some of the nurses that didn't have critical care experience, they would send them to nursing homes," Roberts said. "Yes, the patients there were all sick [with Covid], but when they became critical, they sent them to hospitals.

"Not a single person was in their comfort zone. Everyone learned something new. I don't think anyone is prepared for something like that."

The Lamar University nursing grad was tested from the start of her New York adventure.

"When I first got there, I was in the ICU and I had a younger patient who had underlying condition and they knew he wasn't going to make it through the day," she recalled.

"As soon as I got on the floor and paired up with another nurse, they asked me if I could make the call so he could see his family for the last time.

"It was dreadful to hear all of them crying. That set the tone for me, how it was going to be. I knew I'd better strap my boots on."

Some of the time, the nurses had to improvise.

"We ran out of drugs. The pharmacy couldn't keep up with these hundreds and hundreds of ventilator patients," she recalled. "We had to mix our own sedatives and paralytic drugs [used for intubation].

Roberts spent most of her days at the hospital working in the emergency room, where the nurses worked as a team. 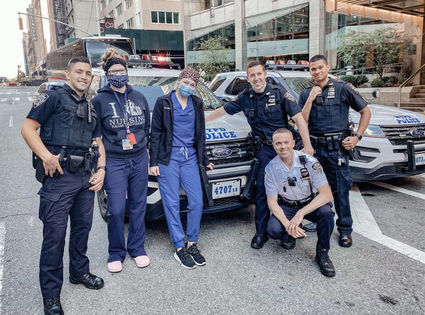 Sierra Roberts, third from left, and one of her nursing coworkers are surrounded by four of New York's Finest during their recent stay in New York City to fight Covid-19.

"We didn't see a lot of anything not related to Covid," she said. "Basically, the whole ER was Covid patients. A lot of the ones I saw were admitted. If they could be sent home, they were."

The long days often began and ended with salutes from the people of the neighborhood. They yelled thank yous and clapped to recognize the nurses.

"That was the most amazing thing I've ever seen," Roberts said. "I think it kind of got a lot of nurses through it. Everybody on the street cheering for you.

"You kind of feel like you don't deserve it, not like a hero, really. We're just doing our job. Cops are thanking you, firemen are thanking you. You want to say, 'No, thank you.'"

Roberts would like to say she's seen the last of Covid-10 but doesn't expect that to be the case.

"I personally don't think it's just going to end and be over. I do think we'll see a second wave," she said. "Who knew this would be so bad?"