By Staff Report
For the Record

Earl Thomas III 'Giving Back To The Community" event 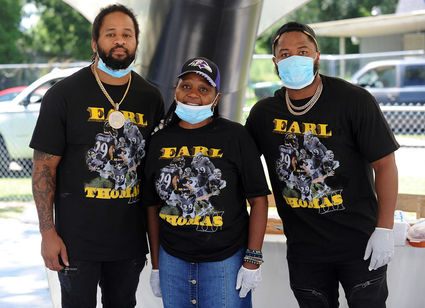 Baltimore Roaven defensive back Earl Thomas III , left, is seen with his mother Debbie and brother Seth during the "Giving Back to the Community" event held in Orange on Saturday.

Orange County football great and Baltimore Raven Earl Thomas III was back home on Saturday to host a drive-thru or picnic-style lunch giveaway for his hometown community.

Nearly 1,000 meals were distributed to Orange residents during the 'Earl Thomas III Giving Back to the Community' event held at a staging area next to Lisa's Hair 'Tique Salon on 10th Street. Those in attendance were urged to respected social distancing and most wore masks as recommended to attend the event amid the current Covid-19 outbreak.

Young and old alike turned out to visit the NFL star who gave out autographed footballs, t-shirts and other memorabilia, often posing with youngsters for photographs. The Thomas family all chipped in greeting guests as Seth Thomas, Earl's brother, carried packaged meals out to a long line of lunchtime patrons. The local residents in attendance had plenty of choices in menu items from boiled crawfish, grilled delights and snow cones to food donations from local restaurants.

"We're very thankful to everyone who helped out and attended the community event," said Debbie Thomas, organizer and mother of the Earl Thomas III. "Giving back to the community who has been so good to us is what this is all about." 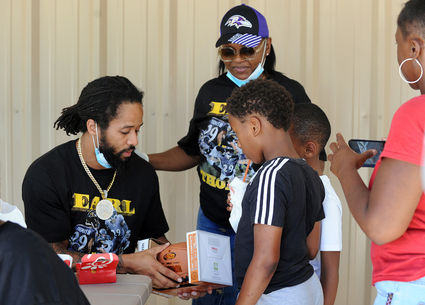 Debbie Thoas looks on as Earl Thomas III visits with and gives an autographed football to Ryan Nickerson and Ahndree Breau.

Earl Thomas III, a 2007 graduate of West Orange-Stark and former All-State Mustang football player, began his professional football career in 2010 after being drafted in the first round by the Seattle Seahawks while still a defensive back for University of Texas Longhorns.

During his time with the Seahawks, Thomas was a core member of the "Legion of Boom" defense that brought down the Denver Broncos 43-8 to win Super Bowl XLVIII in 2014. Thomas and the Seahawks would return to the Super Bowl again in 2015 but fell to the New England Patriots 28-24.

In 2019 Thomas signed a four year contract with the Baltimore Ravens and has become a seven-time Pro Bowler and five-time All-Pro selection during his 10 years in the NFL.