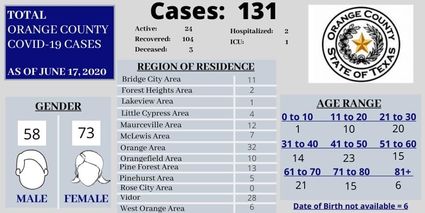 Orange County reported its third fatality linked to the new coronavirus Wednesday as part of its worst five-day spike of new cases since the outbreak began locally in March.

The number of total cases listed on the county's Emergency Management Facebook page jumped to 131 Wednesday from 109 total positives reported Friday, June 12. The number of active cases jumped from 14 to 24.

Twenty-four is the highest number of active cases in Orange County since the county reported 25 cases as active on April 30.

Never before had the county seen as many as 22 new cases in any five-day period.

“There will probably be even more next week,” County Judge John Gothia predicted Wednesday night. “It will take that long for some of the people to remember all the people they’ve been around and exposed.”

The only thing that can be deduced about the death is the person was from the City of Orange area, which had 7 new cases since June 12, the most in the county.

Gothia said he had received no official identifying demographic information about the deceased.

The Facebook report noted an increase from one to two deaths in the Orange area. The county’s first reported death from COVID-19 ocurred in Vidor in late April. Vidor has had 28 positive tests come back to its residents while the city of Orange area is at 32.

Most of the new cases were among young people 30 years or age or younger and seem to back up comments made earlier in the week by Gothia that were not in line with the June 12 numbers.

Monday, he told The Record Newspapers, "It started with some of the young folks getting together on the rivers, just normal stuff. From Monday to today, we’re finding out more and more about how it started."

Eight of the new cases were logged among those aged 21-30, 6 among those 11-20, and the first case of a county resident under 10 years of age was noted.

Besides the 7 new cases in Orange area, 4 new cases come from the Orangefield area, 3 each from Pinehurst area and Vidor, and 2 each in Mauriceville and McLewis areas.

For the first time the county report noted that two people were hospitalized, one in an intensive care unit (ICU).

Gothia said the county had requested another round of testing by the state’s military mobile health unit, but noted only 27 people came to be tested when it was last offered.

“Nobody’s having any problem getting tested if they want a test,” he said.

He noted the state is reporting more than 1,500 ICU beds available and nearly 6,000 available ventilators. Orange County just received a shipment of 12,000 masks, another item that was in short supply until recently.

“The whole reason for the shutdown [Stay at Home orders] was the fear for running out of hospital capacity,” the judge said. “The plan was to slow [transmission] down until the medical community could catch up.”

COVID stats were reported daily through May 20, when the county said it would begin posting them weekly on Thursdays. The first report was issued Thursday May 28, then Wednesday June 3, Friday June 12 and Wednesday June 17.