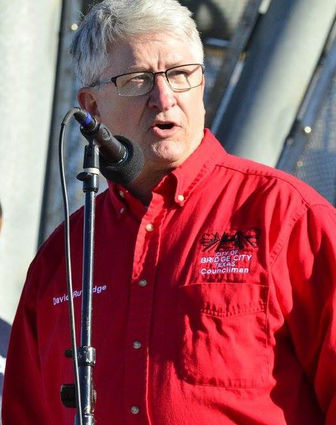 David Rutledge wasn't born in Bridge City. But the fifth-year mayor got here as fast as he could.

"My family moved here from Orange in 1960, when I was 7 years old," he recalled in an interview Tuesday morning.

In 1960, Bridge City, the city, didn't officially exist. The unincorporated area had earned that nickname because of its location between the Rainbow Bridge over the Neches River and the Cow Bayou Swing Bridge.

But the school district was named Bridge City and so were its schools, er school.

"When I first got here, there was only one school building for everybody, located where the existing high school is, but in a different building," Rutledge said. "Texas Avenue was a two-lane street, and there were a lot fewer businesses along Texas Avenue."

In 1970, Bridge City was incorporated as a city. On the 50th anniversary, the mayor didn't have a lot of first-hand memories of the occasion, however.

"I was going into my senior year in high school and I was worried about all sorts of stuff but that," he said.

"I do remember that in 1970, when the vote was going to be taken, there was some arguing going on. But as a senior in high school, that's not something you think about."

Rutledge has seen the population of Bridge City increase from 6,000 to 8,000 while the school district has expanded from one building to four modern campuses with 3,000 students.

After graduating from Bridge City High School, Rutledge worked construction and was seriously injured on the job. He later returned to the workforce at DuPont's Sabine River Works and retired from that job.

Currently, Rutledge is working at Neches Engineers in Beaumont and planning to retire from that job later this year.

He and his wife, Becky, have raised three daughters who have, in turn, given the couple five grandchildren.

Becky is a longtime Bridge City ISD board member. David first got involved with city government in the late 1990s, "when I served on the parks commission," he recalled.

In 2005, he was appointed to fill a vacancy on city council.

"We just both have a desire to give back to the community everything we can," he said. "This is one way we could do it, serving in public office."

Because of term limits, Rutledge left the city council in 2010, but won re-election in 2015 and a year later was elected mayor.

As mayor, he has overseen a lot of progress.

"We've got drainage projects we're working on, and we're all real excited to get those finished," he said. "We're working with the Orange County Drainage District on some roadside ditches, we're getting a new filter press for the sewer plant."

"We've had a bunch of manholes redone that needed it, and we're getting a new [water] well at the Sunnyside Tower. There's just a whole lot going on."

The city and Bridge City Chamber of Commerce had planned to celebrate the 50th anniversary of incorporation with a big celebration over the Fourth of July weekend.

The big party has been delayed by the coronavirus pandemic.

"We were working hard on getting a celebration for the 50th anniversary, but then COVID-19 comes along and pretty much knocks the chocks out of all our planning," Rutledge said.

While he might not have paid too much attention to the incorporation election in 1970, he has learned much about his hometown's history since.

"I know it started out with the Mayor's Council in 1970 and the first mayor was Preston Wood," he said. "They started it off and groups like the Chamber, the Rotary, the Masons and all the other groups that contributed.

"The groups and people who have made Bridge City what it is today are too numerous to mention."