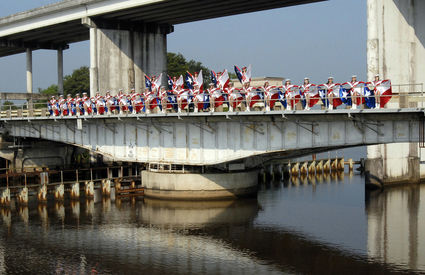 In 2009 the Bridge City High School Strutters dance and drill team posed on the Cow Bayou Bridge for their annual photo. The photo is now part of the historical archive held by the Texas Historical Commission. RECORD PHOTO: Mark Dunn

Fifty years ago this week citizens of the growing community known for decades as Bridge City voted to officially become a municipality. The election to incorporate was won by a slim majority and on July 13, 1970 the declaration was approved- the City of Bridge City was born.

But Bridge City as we know it today would not exist had it not been for the 1939 construction of a two lane, electronically powered steel I-beam swing bridge crossing Cow Bayou. The pre-WWII era "Cow Bayou Bridge" would change everything.

At it's crossing a city would grow and with it the school district, commerce and eventually be named to the National Register of Historic Places by the National Parks Service and a Historic Bridge of Texas by the Texas Historic Commission. It remains as one of just two bridges of it's kind in Texas.

Bridge City was named for it's bridges. Two of them, the monolithic 1938 Port Arthur-Orange Bridge, later renamed Rainbow Bridge, and the Cow Bayou Bridge crossing the bayou south of the highway through Orangefield. When completed both bridges provided motorists a straight shot between Port Arthur and Orange on the newly paved SH-87, nicknamed the "Hug The Coast Highway" going down to Galveston along the gulf shoreline.

Years earlier Orange County citizens had sought highway improvements from the State Highway Commission. In 1936 a delegation led by D.E. Roach, President of the Orange Chamber of Commerce, made a formal request to the commission in Austin. Roach was a member of the Highway 87 Association, a group of over 75 of the most influential citizens from Jasper, Orange, Newton, Sabine and Jefferson Counties. A proposal for a fixed span concrete bridge with 25 1/2 foot vertical clearance was submitted. The concrete bridge permit request was denied by the U.S. War Department citing it unsuitable for oil machinery barges that was heavily trafficked on the bayou and necessary as WWII was approaching. The debate continued and by March 1939 the Texas Highway Department submitted plans for a hand-operated swing span bridge. Ultimately, the Cow Bayou Swing Bridge was built with an electric motor that operates the swing span from a manned wheelhouse.

Barge traffic up and down Cow Bayou was frequent until the mid-1960's. The operation of the Cow Bayou swing bridge was a regular occurrence and considered a routine part of life in early Bridge City.

Before the bridges, Bridge City was known as Prairie View. A coastal prairie used for pasturing cattle amid a scattering of homes and a rural school district along it's roughed-out roads and ferry crossings. A trip between Orange and Port Arthur could take hours. Following the completion of the Rainbow Bridge in 1938 increased traffic on the winding narrow rural highway through Orangefield was considered dangerous. Finally, with almost continuous construction on SH-87, The Port Arthur News announced on August 6, 1939 that when finished, the Cow Bayou Bridge will "span the last remaining gap on the highway between Orange and Port Arthur. Work of hard-surfacing the road will probably be begun about the same time as the bridge and motorists should be traveling over the new highway within a year." The swing bridge was completed in November 1940. Prairie View would never be the same.

The grand opening and ribbon cutting for the new sector of SH-87 between Orange and Port Arthur including the Cow Bayou Swing Bridge was held on April 2, 1941. An estimated 3,000 people attended the ribbon cutting performed by Miriam David, the young niece of Julian David the president of the Orange Chamber of Commerce. County Judges of Beaumont and Orange, Charles Howell and F. W. Hustmyre respectively, also spoke. The Bengal Guards of Orange and the Red Hussars of Port Arthur, musical marching bands from the two high schools, marched towards the Cow Bayou Bridge from opposite directions and met in the center of the span for the ribbon cutting.

Following the celebration, Prairie View County School District consolidated with nearby Winfree School County District, and the name Bridge City was suggested by Mr. O. Eudale Granger, since the community was between two bridges: "the Orange-Port Arthur Bridge and the Cow Bayou Bridge." The name stuck and 'Bridge City' it became. With it came the Bridge City Independent School District and shortly thereafter the town had a chamber of commerce of it's own that boasted "Bridge City- the home of friendly people on the grow" - and that was mostly true.

In 2000, the Texas Historical Commission identified the bridge as eligible for the National Register of Historic Places. THC also stated that every effort should be made to preserve the mechanically sophisticated Cow Bayou Bridge, which was identified as one of two rare highway swing bridges remaining in Texas. The reviewer, Ms. Jamie Wise, responded to TxDOT that "the Cow Bayou Bridge is one of two rare types of swing bridge remaining in Texas, it appears particularly important that we consider all options for its preservation. The mechanical sophistication of the bridge adds to its significance." 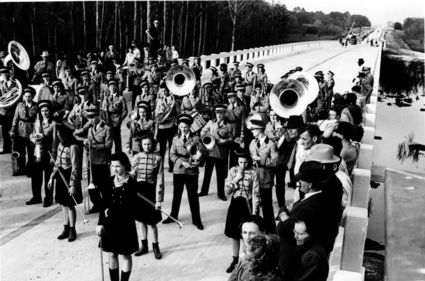 The Bengal Guards of Orange and the Red Hussars of Port Arthur, musical marching bands from the two high schools, marched towards the Cow Bayou Bridge from opposite directions and met in the center of the span for the ribbon cutting.

Seven years later a small group of Bridge City citizens met to become a collective voice for the Cow Bayou Swing Bridge and to initiate the process for nominating it to the National Register of Historic Places. The group drew the attention of the Historic Bridge Foundation, a national advocate for the preservation of historic bridges, who wrote a letter to the Bridge City Citizens for Historic Preservation in support of their efforts. The National Register of Historic Places is a federal program administered by the Texas Historical Commission in coordination with the National Park Service. The citizen's effort was successful. On May 10, 2010 the Cow Bayou Swing Bridge was officially entered in the National Register.

In 2008 TxDOT began rehabilitation of the swing bridge. Specifically, repairs were needed to address the shift and sticking of the south end of the bridge joint. Hurricane Ike and several years later the historic preservation of the bridge was completed. In August 2015 the Bridge City Chamber of Commerce held a ribbon cutting followed by a swing bridge-ride on the bayou for a gathering of citizens. It hasn't been swung opened again since.

The Cow Bayou Swing Bridge was listed on the National Register of Historic Places under Criterion C in the area of f engineering with significance at the state level. The bridge retains its integrity of design, materials, location, feeling and association. It is one of just six such properties in Orange County. The Rainbow Bridge, which was listed in 1996 is a Jefferson County designation.