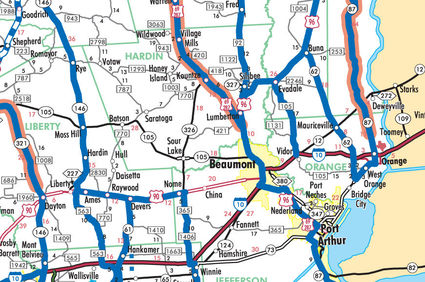 Officials are calling for a mandatory evacuation of the county's nursing homes at this point.

Laura, the second of two tropical cyclones active in the Carribean and Gulf of Mexico this week, is causing the most worry. As of midday Monday, Laura was on a path to make landfall as a Category 2 or 3 hurricane early Thursday morning on the Texas-Louisiana border.

The National Weather Service said a Category 3 hurricane, with winds up to 129 miles per hour, could cause widespread flash flooding and create a storm surge of 10 feet above ground level that could back up rivers and bayous and cause flooding as much as 30 miles inland.

Bridge City issued a disaster declaration Monday but is holding off on calling for an evacuation.

The city sits across the Rainbow Bridge from Port Arthur, at the southeast corner of Texas. It is bounded by the mouths of the Sabine and Neches Rivers and the top of Lake Sabine. Nearly 100% of Bridge City's homes were flooded by storm surge from Hurricane Ike in 2008.

"It's way too early to be talking about an evacuation," Jerry Jones, city manager at Bridge City, said Monday afternoon. "They've got to figure out where it [Laura} is going yet.

"We did make the emergency declaration. That's something we have to do in order to be able to utilize state and federal resources, if we need to."

Tropical Storm Marco was the first of two cyclones to track toward the Gulf Coast this week. Sunday, its winds briefly topped 75 miles per hour on average and it was classified Hurricane Marco. But it has

By Monday, Marco's winds were averaging 39 mph. The storm was projected to reach land later Monday near New Orleans and track west.

Gothia announced Monday that the Orange County Courthouse would close Tuesday. Lamar State College Orange started its Fall semester Monday morning, but sent students home for the week at noon Monday. Area public primary and secondary schools made the call to close Monday Aug. 24 through Friday, Aug. 28 over the weekend.

Still scheduled for Tuesday at the County Administration Building is a 2 p.m.Commissioners Court meeting. The scheduled 1 p.m. public hearing regarding a proposed Reinvestment Zone to precede a tax abatement for a new project planned for Foreman Road has been postponed, Jessica Hill, Orange County Economic Development Corporation director, said.

The Orange City Council has scheduled a 5:30 p.m. meeting Tuesday. It had not been postponed, as of late Monday afternoon.