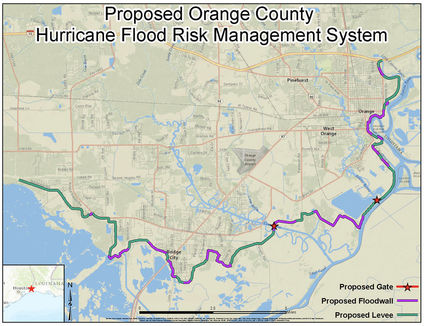 County Judge John Gothia signed on the dotted line and declared it "a historic day for Orange County."

His partner on Commissioners Court recalled the day he and Gothia traveled to meet personally with officials from the General Land Office and convince them the county was in favor of the long-discussed project.

"There's many times I didn't ever think we'd get to this point," said Precinct 1 Commissioner Johnny Trahan.

But after much negotiating, the stroke of several pens brought the $2.4 billion Orange County Hurricane Flood Protection Levee from a dream to a pinch-me moment.

It will include seven pump stations to push rainwater outside the walls along with 56 drainage structures and 32 closure gates. Two navigable sector gates would be constructed in Adams Bayou and Cow Bayou to reduce surge penetration.

The GLO agreed to pay Orange County's $74 million share of the first stage of the federal project -- design and engineering -- funded at 65 percent by Congress in 2017.

In all, Orange County's 35 percent "matching local share" of the project comes to $827 million but Gothia says Gov. Greg Abbott and the Texas Legislature have agreed to fund it in chunks every two years.

"I think when you spend this much money on design, I don't think they're going to change their mind," Trahan said. "Right now, this hasn't cost Orange County anything."

Gothia mentioned 2026 when asked about when the project might come to fruition.

He was like a kid in a candy store when he recalled Monday's signing ceremony a day later in Commissioners Court.

"Hopefully, some day my emergency management coordinator will be able to issue the command when we have a hurricane like Laura bearing down on us to, 'Close the gates.'

Hurricane Laura, a Category 4 hurricane at the time, was bearing down on Orange County Aug. 26 and National Weather Service forecasters said the storm surge "was not survivable," and then it turned right before reaching shore and landed in Louisiana.

Among those who visited Orange in the wake of Laura's high winds was President Trump. During a 30-minute visit with local and state officials, Trump visited with Gothia and other officials about the project.

"We were always interested, just not interested in paying for it," Trahan said. "It was just kind of 'Play it until the very end' -- either it happens or it doesn't.

"Obviously, we weren't going to obligate ourselves for $800 million but we always hoped the state or the Feds would step in and take that share, and they've started that process.

"Now, got a colonel [Vail] at the Corps who really wants to build this project. I think the president coming into town and making a few comments, certainly didn't hurt. I think everybody's on board, so I'm hoping it will happen.

"I feel better about it than I ever have. Yesterday was a big step."

Gothia said the addition of pumps to the original levee plan were must-haves.

"One of the things we negotiated over the course of the two and a half, three years was that when it first started, there was no drainage component within the levee project," Gothia said. "It was just strictly a storm surge system. I wouldn't sign it. Neither would the Drainage District. We wanted it to have a drainage component in the system."

For that, Gothia gave credit to Babin and U.S. Rep Randy Weber.

"Congressman Babin and Congressman Weber went back this year and added an amendment to the federal legislation for this project that said it could include a drainage component. Once they did that, the Corps of Engineers was able to go back and look now at drainage components within the system.

"The drainage components in the contract now say they will do no harm. That means the pump systems have to be able to handle at least the same amount of water that's going through our drainage system now in a rain event."

Regarding future funding, Gothia explained that while the federal government "has funded their entire portion, the way the Legislature works in the state, each session they'll fund a portion of it. They funded $200 million last year and out of that we got $74 million.

"Next year's session they'll go in and determine how much they're going to fund for the next phase through the state, to cover our portions of it. It'll continue like that every 2 years."

He made it clear he does not expect any reversals of fortune on this project.

"If for some reason, the state was to not fund us," Gothia said, "we would have to opt out. But we've got commitments from the state and the Governor's office that they're going to do everything they can to continue to move the project forward by funding it."

Gothia said design and engineering should wrap up in 2021 and the next phase will be land acquisition which will involve private landholders and state land.

"Once that's done, they'll probably start construction two years after that. Once they get contractors involved, it's going to move."