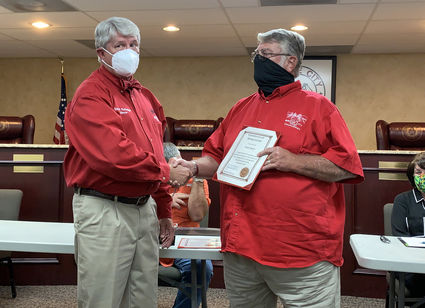 Bridge City mayor David Rutledge, left, presents a certificate of appreciation to Mike Reed for his above-and-beyond help to the city during Hurricane Laura.

The Bridge City Hall council chambers were full again Tuesday night – at least as full as they could be with the seats spread far apart for social distancing.

Not only did COVID-19 forced the monthly city council meetings to move to telephones, but there was a little thing called Hurricane Laura at the end of August.

October's meeting featured lots of thank-yous from Mayor David Rutledge and the city to the folks who helped the city get days without electricity and for some the loss of property uprooted by winds of nearly 100 miles per hour.

"I want to thank the staff and all of our employees for working really hard during Laura," Rutledge said. "Even though it was a minor hurricane relative to others we've encountered, it still takes the same amount of work and dedication to planning and execution to make it work.

"I think the citizens are so well-served at this time, I think we're spoiled."

City Council gave out special awards to two public safety officials who played a big part in shepherding the city through the storm – Carman Apple, district coordinator for the Texas Division of Emergency Management, and Capt. Michelle McDaniel of the Department of Public Safety.

"These two folks helped us out behind the scenes and nobody knows about it except us," Rutledge said of the two women. "But they did such a good job for us that we just couldn't let this go unrecognized."

Reed, a member of the Transportation Department for Bridge City ISD, set up and oversaw the operation of a Point of Distribution for after-storm relief efforts at Bridge City Intermediate School.

Hurricane Laura was a Category 4 hurricane tracking straight for Bridge City and Orange until a late turn to make landfall in Louisiana.

"When we started, we didn't know how bad it was going to be. But we knew if it knocked out electricity or water, the essentials, then we knew we were going to need someone who could help us set up our POD," Rutledge said.

"The person that came to mind for that is a school district employee. He has access to the building, equipment, you name it, so he's the perfect choice for this. I called Mike and said, 'Can you help us out on this?' and he said, 'Sure. When do you need me there."

"Mike showed up, set it all up. I think the first when we first got there, Mike brought one of the air-conditioned buses from the school and ran it all day long for the [National Guard] guys to get cooled off.

"I think that was a kind of a rarity at that time. Mike took care of them even better than they were getting it at other places around.

"Mike was a valuable asset to everybody involved. He made my job great."

Fields and fellow members of the Bridge City Chamber of Commerce put together a much-appreciated meal for the city workers.

"After we got into it a little bit," Rutledge said of the Hurricane Laura aftermath, "we were surprised one afternoon when a group of ladies in red blazers showed up with a pot of gumbo that was huge.

"They fed all the people that were working. The police department came down. Everybody was in here eating. We really had a great time."

Fields had an easy explanation. 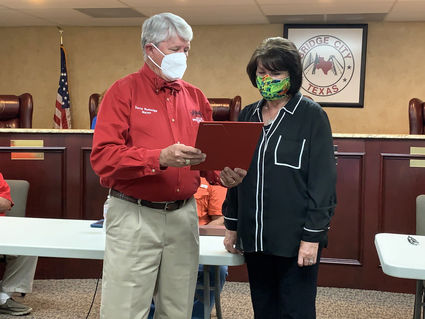 The City of Bridge City honored Mayor Pro-Tem Lucy Fields Tuesday night, with mayor David Rutledge, left, presenting her a certificate of appreciation for her help during Hurricane Laura.

"You know I love to cook," she said. "Our city crews were so amazing. They worked so hard and looked exhausted and so I just really wanted to say, 'Hey, thanks a lot,' and show our appreciation.

"And some of the Chamber ladies helped."

Said Reed: "It's a pleasure to be able to help. Especially when you work for the school district and you're associated with the city to kind of be the liaison between the two.

"The city and the school district have always worked together. We work well together and I was just proud to be able to do it."

The council's business agenda was light. They approved two ordinances required by the federal government to receive grant contracts.

Mike Lund reported that the city had federal grant money available for 75-80 homeowners needing new sewer lines but that only a couple of weeks remained to apply. People should call for Lund at city hall, 409-735-6801.