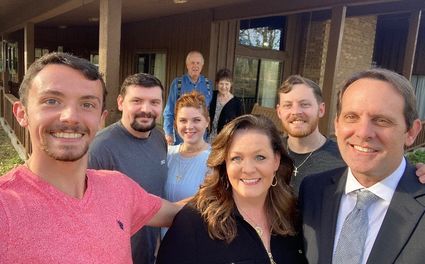 After winning what is believed to be the most expensive election race in Orange County in 20 years, Rex Peveto had to wait nine months before claiming his office.

He did it at the family estate in north Orange County, with his new court coordinator Liz Langston reading the oath and Peveto repeating after her.

Because of Covid-19, only the closest of family members attended.

“I would have loved to have had a large event, because I had so many people support me,” the second-generation Orange attorney said.

“But with Covid the way it is, I didn’t want anyone to get sick. “My family knows so many people who have had Covid. My mother’s sister died from Covid.”

“I’m awful pleased for him and the county,” the elder Peveto said. “I feel it will be a real settling, steady influence.”

Rex Peveto was one of 13 officials elected in county- or precinct-wide races in 2020 to be sworn in on Jan. 1, 2021. County Judge John Gothia was sworn in for a two-year term and all others for four-year terms.

Gothia was a replacement for former Judge Dean Crooks and Kirk Roccaforte a replacement for Gothia as commissioner. Because Crooks’ surprise resignation took place before the midway point in his four-year term and Gothia eventually was appointed to that office in the same time frame, the judge’s election is just for the remainder of those four-year terms.

All 13 of the officials ran as Republicans and not one faced an opponent, so, in effect, their wins in the March 3 primary secured their jobs before the Nov. 3 election.

Peveto was the only one of the eight winning his first term in the job not to be called to work early because of his predecessor’s early retirement.

Because of coronavirus, judges are holding no jury trials and doing most hearings via Zoom. Retiring Judge Dennis Powell, who raised $115,000 in his winning run for the 163rd bench in 2000, conducted cases remotely from his new retirement home in Boerne before his term ended in December, Peveto said.

“Judge Powell has been awesome,” Peveto said. “He’s continued to work hard, continued to schedule things, so I already have a week’s cases scheduled.

“Judge Arkeen and Judge [Steve] Parkhurst have been real helpful, too.” 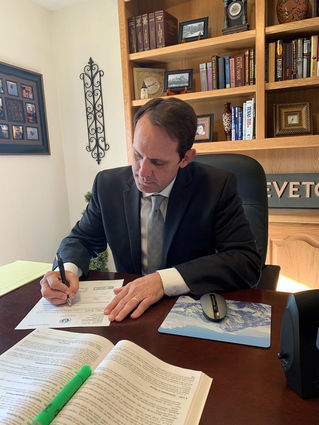 Peveto and his primary opponent, Orange attorney Michael Catt, each spent nearly $50,000 in their March races. Peveto won with 59% of the votes, finishing about 2,400 votes ahead of his opponent.

He’s been busy closing out his practice in his family law firm headed by Wayne Peveto, who was a state representative for a dozen years.

“My brother Eric is taking over the cases I couldn’t complete,” Rex Peveto said.

Peveto said his biggest win in private practice was a $2.9 million verdict on a wrongful death medical malpractice suit. He admitted that “with tort reform, our practice changed quite a bit.

“We took on more criminal cases, more real estate and probate cases. But it also prepared me for all the cases a judge has to handle," he said.