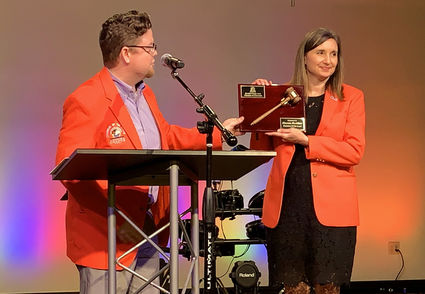 Chris Kovatch, incoming Chairman of the Greater Orange Area Chamber of Commerce, presents a gavel on a plaque to 2020 Chairman Maureen McAllister during the Chamber's Awards luncheon held recently at Orange's First Baptist Church. The small ceremony replaced the more lavish banquet that was postponed by COVID-19 protocols.

Cheers mingled with tears at last week's scaled-down Greater Orange Area Chamber of Commerce Annual Awards luncheon that was topped by Michelle Tubbleville being named Citizen of the Year.

Tubbleville, the Special Projects Coordinator for the County of Orange, was honored for the 24/7 way she brings together people with needs caused by natural disasters with volunteers or government programs to meet those needs.

But she had to share the spotlight with the bittersweet memories of two past Chamber presidents awarded Lifetime Achievement Awards posthumously to former mayor Dan Mohon and auto dealer Dean Granger.

Additionally, third former Chamber regular who, like Granger and Mohon, passed away in 2020, Tim Schossow was honored by having the annual fundraising golf tournament named in his honor.

The event at First Baptist Church-Orange, originally scheduled for December but rescheduled because of COVID-19, began with Maureen McAllister passing the gavel as 2020 Chamber Chairman to 2021 Chairman Chris Kovatch. Then Kovatch honored McAllister for her service. Sherry Hommel, a member of the Past Chairman's Council, assisted them in making the night's awards.

The annual banquet normally draws crowds of 300 or more. About 50 people attended the slimmed-down luncheon prepared by BG Catering.

Dean Granger was represented at the gathering by his wife, Kim, and brother Al Granger, who partnered with Dean to co-own and operate Granger Chevrolet and Granger RV. Dean was cited as the driving force of the Chamber's Shop Local initiative.

Besides the Chamber, Granger was also on the committee for First State Bank and the Board of Directors for the City of Orange Economic Development Corporation, as well as serving in many positions for the United Way of Orange County, including Board Chair.

Al Granger broke into tears when it was time to talk about his brother and his sister-in-law Kim best summed it up.

"You know how when you're grieving, you have good hours, OK hours, hard hours and really, really hard hours," she said. "Today has been good and hard. We thank you for honoring him."

Mohon had the unique distinction of serving as mayor for two cities. He was Orange's two-term mayor from 1988-92 and was just re-elected as Pinehurst mayor before he passed away.

He was a native of west Texas and a graduate of Texas Tech University, where he earned a business degree in banking and real estate. He and his wife, Manon, moved from Lubbock to Orange in 1974, with their two young sons, Monty and Marcus.

He served his community at First Baptist Church, then Trinity Baptist Church. He was a member of the board of the Lutcher Theater, the Lamar State Foundation board, the Red Cross board, the Southeast Texas Regional Planning Commission, and a past president of the Orange Rotary Club.

"Dan loved Orange and he loved serving," said Mohon's wife. "He and this community were like good friends. Thank you for that friendship."

Mohon's sons, Marcus and Monty, told of growing up listening to their dad's stories and slowly realizing the powerful connection between their dad and the city of Orange.

"I'm a son of Orange, a little knucklehead who grew up here," Monty said. "This is a good place, a solid place, just a lot of good people that have a lot of good stories to tell."

Schossow, a Bridge City resident and the husband of longtime Chamber President Ida Schossow, was "really the unofficial third employee of the Chamber. He just never received a paycheck," McAllister said. "He's been on our board and involved in the Chamber for a very long time. 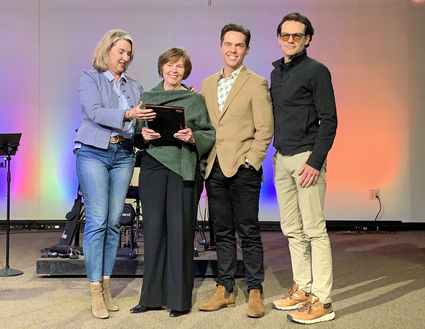 "He dedicated his life to whatever Ida told him to do, and he loved it. He organized the golf tournament. Our executive committee got together and wanted to do something special to recognize him."

"Tim would have loved this," Ida Schossow said of the honor. "Thank you for this beautiful honor."

Tubberville worked for the county's IT department until moved to her current job after Hurricane Harvey in 2017.

"Commissioners Court saw how much of her own time she spent to make sure as many people as possible were helped," Commissioner Johnny Trahan said. "It wasn't even her job.

"So we decided to put her in a position to coordinate volunteer groups and aid coming into the county. She has brought so much aid and helped so many that would have ordinarily fallen through the cracks. There is nothing she wouldn't do to help our citizens."