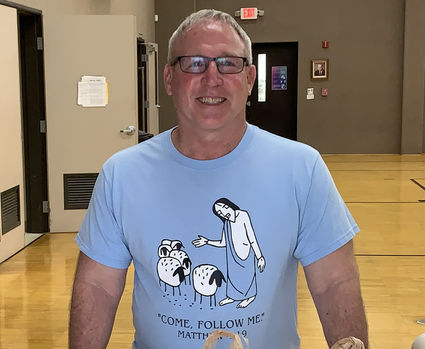 Rev. Paul Zoch, pastor of Bridge City's Good Shepherd Lutheran Church, is running for a seat on the Bridge City ISD school board in the May 1 election.

"A lot of parents are pulling their kids into home schooling because of bullying issues," he said recently when asked why he is running for a seat on the BCISD school board in the May 1 election.

His opponent for Place 1 is incumbent Patty Collins,

Zoch, the pastor of Bridge City's Good Shepherd Lutheran Church, and Collins were classmates that graduated from Bridge City High School Class together in 1980.

Zoch earned an accounting degree from Lamar University, which took him to work in Houston. While there, he earned a masters from the University of Houston but decided accounting was not his be-all, end-all.

"I got the call to be a preacher," he said, explaining that he was ordained as a Lutheran minister in 2016.

"Being a pastor, I hear some of the issues in the community. I want to study more intently how we can work on the issue of bullying, find some programs we can apply to schools that would kind of alleviate the problem."

Bullying has been around probably since the dawn of mankind and can cause physical injury, social or emotional problems and, in some cases, death by suicide.

Its prevention has become more and more a point of emphasis in education, especially with the addition of the internet and cyberbullying.

"Every generation is different," Zoch said. "Is there a different understanding of bullying now? Did we go through bullying and we had enough strengths or social protections that it didn't hurt us?

"I just know it's a national issue."

Zoch said he hears other issues from church and community members.

And, as a property owner, he's intent that the school board spend his tax dollars wisely.

But the bullying issue has his attention.

"A lot of times we have a slogan, like 'Low Tolerance on Bullying.' But how do we make that really happen?" Zoch asked.

"If we just tell that to kids, they don't really understand what they're doing, so how can they modify their behavior, so that we do actually have no bullying?

"Sometimes they're just sent to ISS [In-School Suspension]. Have we dealt with the issue that's really going on? That kid has an issue because they're bullying, so how can we address that issue?"

The reverend said he realizes the increased burdens placed on schools these days.

"I know that society has put a lot on our school system, but I think that if we intentionally put funds in [anti-bullying programs], we can do that.

"What I find is if we don't do this now, it seems like we're having issues in society after they graduate.

If we had just addressed those problems early on, I think we'd have healthier kids, they'd be better educated, and, in the long run, maybe we can alleviate some of the social issues we're having now."