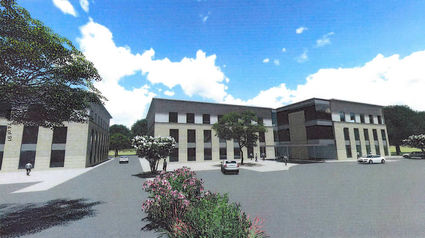 A rendering of the proposed Gisela Houseman Medical Complex, featuring a hospital with up to 20 beds, an ambulatory surgical center and doctors' offices, was presented to Orange city council members.

Orange City Council moved a hospital and medical complex for Orange County closer to reality at its Tuesday evening meeting.

The vote was unanimous to approve a 10-year schedule of decreasing tax abatements for the project at Eagle Point being put together by Orange Multi-Specialty Real Estate Holdings, a partnership fronted by local physician Dr. Marty Rutledge, and NexCore Group, a Denver-based healthcare developer.

"This is a project that is long overdue," Orange Mayor Larry Spears, Jr., said. "We've all wanted a medical facility. This [abatement] is a way of saying, thank you for helping us establish this.

"I look forward to them getting it going. I'm ready. And so is the rest of council and staff."

Orange is the largest county in Texas without its own hospital since Baptist Hospital Orange closed its in-patient care in 2015 and shut down its emergency room two years later.

A county-wide election to create a hospital taxing district aimed to prompt building of a new hospital was soundly defeated in December 2017.

In June of 2019, the Houseman Companies donated 20 acres of land in the Eagle Point area near the intersection of Interstate 10 and U.S. Route 62, on Orange's eastern boundary for the project voted on Tuesday.

Those plans were sent to the back burner just months later by Tropical Storm Imelda, and delayed by later storms and the coronavirus pandemic shutdowns in March of 2020.

The city has pledged money to help build a four-lane Eagle Point Parkway to bisect the property.

The project will be named the Gisela Houseman Medical Center.

According to documents in Tuesday's agenda packet, the developers will invest approximately $50 million in Phase I of the project that will include a micro hospital, and ambulatory surgical center and a medical office building covering from 80,000 to 100,000 square feet, depending on demand.

Phase II would be of a similar buildout scale, the paperwork says, with additional medical office space and/or a senior housing component.

The property is currently valued at $40,000 by the Orange County Appraisal District and papers filed for the city estimate the tax valuation will be increased by $50 million during the 10-year term of abatement.

That total -- $50 million – is also listed as the value of construction, with a productive life of 50 years for the new structures. The paperwork calls for 100 existing healthcare jobs to be retained and another 100 created with a total annual payroll of approximately $6 million.

The abatement agreed upon by council calls for a 100% tax abatement for two years, beginning in the calendar year of substantial completion.

"This investment will not only create short-term jobs, through the construction of buildings, but both the micro hospital, surgery center and medical office will bring significant well-paying jobs," Dr. Rutledge said in the abatement request submitted in December, 2020.

"Furthermore, this investment in the healthcare of the community brings a desperately needed service back to Orange. Our ownership group has spoken with the local industrial plant managers and they recognize that these basic healthcare services offered at this campus are critical to the long-term growth and sustainability of the community."

Jay Trahan, Director of Economic Development for the City of Orange, noted Tuesday's action leaves two more steps for formal approval of the abatement: a first reading of a resolution at the April 13 council meeting, followed by a second and final reading April 27.

The process to grant the abatement began in February with the establishment by council of a Reinvestment Zone at the project site.

In other action Tuesday, council approved an Orange EDC motion of intent for an incentive of up to $95,000 for Water Tree Orange, located on N. 16th St., accepted $357,000 in Community Development Block Grant funding for 2021, and officially named former Beaumont mayor Guy Goodson the new city attorney.