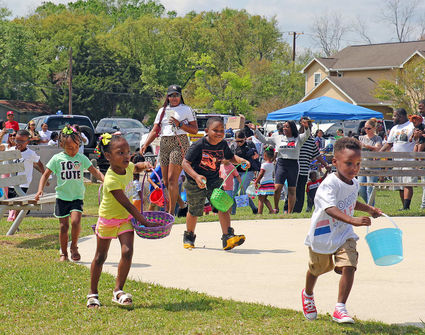 About 150 children took part in the Easter Egg Hunt put on by the neighborhood group "Fruit City is Back" at Navy Park in Orange Sunday afternoon. Besides candy, some of the eggs contained tickets for prizes like a bike or scooter, gift cards and cash. The event included food, games and ice cream.

Navy Park was a beehive of Easter finery Sunday, awash in bright colors, packed with children and their parents, and overflowing with smiles.

Among those enjoying themselves were the organizers of the Easter Egg Hunt and neighborhood get-together, a group of 30- and 40-somethings giving back.

"We were kids in that community at one time. It's time for us to give back," said Nicholas Jackson, who along with friend Robert Jack is credited with coming up with the idea for "Fruit City is Back!"

It's an organization hoping to host a number of future outings like the one Sunday that brought about 250 people into the park in east Orange's Navy Addition, located west of Simmons Drive.

Preshawn Henson said Fruit City is Back! has about a dozen members.

"This is what we did back then. We came to the park on Easter Sunday, had a good time, fellowshipped with friends. And we just wanted to bring that back.

"We got together and with the help of an overwhelming response from the community, we made it happen."

Children – the youngest were accompanied in their hunting by their parents – scurried across the park to fill their baskets with some of the thousands of plastic eggs put out on the grass Sunday morning. The eggs contained candy.

Some contained money or tickets for special prizes like bicycles, scooters and even a pair of vintage Air Jordan shoes.

Sack races were held and in addition to playing on the park's swingsets and playground structures, Fruit City is Back! brought in five inflatable bounce houses and slides. There was a train for small children and a larger one for bigger children and their parents.

Free food was served up after the games, everything from popcorn to cotton candy to pizza and grilled chicken. There was even an ice cream truck.

Jack said he and his group spent about two months planning Sunday's event. And they spent money setting it up. But he added that the community was quick to chip in and that many had contributed to the cause.

"At the end of the day, it's for a good cause. It's not about us," Jack said. "Today is about the kids, and let this impact them in a good way. And stay positive, keep positive energy and positive vibes at all times."

"This will provide some excitement for the kids," Michael "Doc" Booker said. "It's all about the kids." 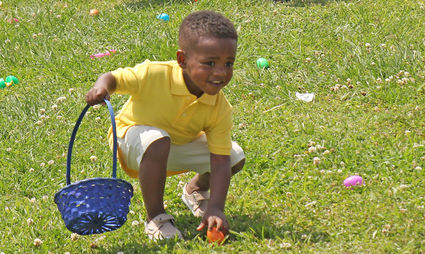 A boy brightly dressed for the occasion scoops up an egg for his basket.

The Fruit City is Back! members are next planning for a Juneteenth Barbecue Cookoff and hope to follow up with a Back to School event, as well as year-end holiday events.

"When we were growing up you had the older guys like Mr. Gatti's Pizza that did stuff for kids in the park," Booker said. "We want to basically bring back that same environment that they had back then.

"That's why Fruit City is back. We're bringing back the excitement for the kids, so when we get older someday, we'll have our kids remember what we did, and they'll keep it going."

Jack said it was pay-it-forward movement with a gratifying end-game.

"The whole movement is about trying to come back and come together and give back to the community as one and make sure the kids are very safe in their environment," he said.