Upended by 'fluke,' Pullen bounces back 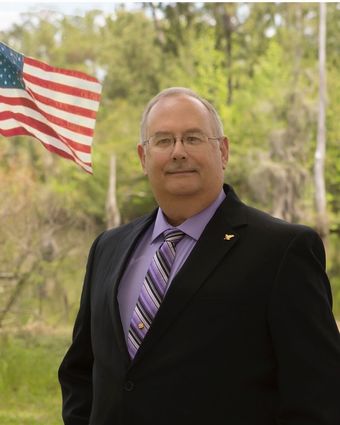 Patrick Pullen, Orange council member seeking reelection in District 1 in Saturday’s election, says he’s had a yearning to serve fellow man since enlisting in the Marine Corps in 1975.

And uncertainty over whether he could physically continue to do the job for another three-year term kept the retired Orange Police captain from registering to run until the Valentine’s Day deadline.

“I wanted to make sure I could get around and serve my constituents,” Pullen explained. “I decided I’d be up to it.”

Pullen suffered what he called a “fluke” injury last Sept. 30, that was as nasty as it seems unlikely.

While pushing a garbage can to his curb, Pullen fell and shattered both legs below his knee.

“I broke my tib-fib [tibia and fibula] in three places on each leg and I tore my right foot completely off except for the skin,” he said.

Surgeons reattached his foot and set his broken bones. He rehabbed. A member of Cornerstone Baptist Church “for years and years,” he relied on his faith.

By mid-February, he decided to run for office again.

“I’ve been on council for six years and in the last six years we have accomplished a lot of things in this city as a mayor and a council,” Pullen said.

“But there’s a lot we’re still working on.”

The construction of the Riverside Pavilion, replacement of the playground at Lions Den Park, building a skate park on Sunset, the establishment of an anti-litter campaign are on the list of achievements.

The new city recreation center is one expected to break ground on construction any day now, but Pullen still is pushing for lights on MacArthur Drive, better code enforcement and a park for the Roselawn addition.

“We’ve done so many things for the city parks and I want the children in Roselawn to have what other children have. We’re looking for land we can get donated,” Pullen said.

“But what people forget is it takes a while. Government is as slow as December. You’ve just got to stay there.”

Pullen is one of two Orange incumbents being challenged in their reelection bids. Orange Mayor Larry Spears, Jr., is running for his second term against Charles Thomas.

In West Orange, current alderman Randy Branch is running against Jim Whittington for mayor after the retirement of Roy McDonald.

Polls will be open 7 a.m. to 7 p.m. Saturday but voters must vote at their designated precinct boxes, unlike early voting when county-wide polling places were open.

For the Pinehurst City Council, three people are running for two at-large seats, with the top two vote-getters declared winners.

Council races are a bit harder to describe in Pinehurst, where mayor T.W. Permenter is unopposed for a one-year term.

There’s a one-year unexpired term being contested by incumbent Greg Willis, who took Permenter’s council seat when he was chosen to replace the late Dan Mohon as mayor, and Kerri Donnaud Arrington.

The top three vote-getters will be elected.