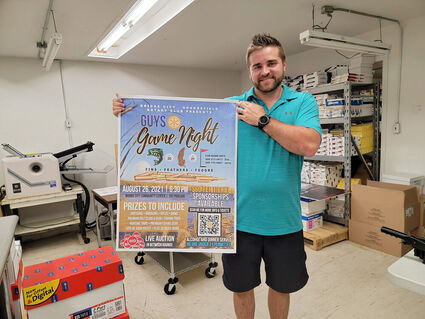 The Bridge City-Orangefield Rotary Club took notice of how popular the Bridge City Chamber of Commerce Purse Bingo events have been the last couple of years. Since the Rotary’s main fundraiser, the Bunny Run, has been cancelled due to COVID the last two years, they decided to take the Chamber event and put a male twist on it with a Guys’ Game Night.

“We saw how well the ladies did with the first Bingo,” said Eric Andrus, one of the event organizers. “We talked about it. We’ve been talking about it for a while. We just need to get something going, get everybody back and try to get some funds coming in, get the students their scholarships at the end of the year.”

This will be the Rotary Club’s first fundraiser in two years.

“We’re just ready to get back to some since of normalcy,” said Andrus.

Scheduled for 6:30 p.m., Aug. 26 at the Bridge City Community Center, a $60 ticket includes 10 games, a barbecue dinner of links and pulled pork from LBS Catering and two drink tickets. No one under 21 allowed.

“These game [prizes] will range from rifles, handguns, shotguns, fishing trips, hunting trips, we’ve got some pellet grills, have washer boards…,” said Eric Andrus, one of the event’s organizers. “The big ticket items the guys will play games for and of course the door prizes will be given away. There will also be auction items between rounds.”

Andrus said auction items were still being collected and a list is not yet available.

“It’s going to be great. There will be food and alcohol,” he said.

Would this be an event men would be interested in?

Some of the funds will go to several scholarships awarded each year to seniors in Bridge City and Orangefield High Schools.

There is discussion of next year, possibly opening the event to everyone, as there have been several women that expressed a desire to attend.

“Hey, we like that better than a purse,” is the comment Andrus said the committee has been getting.

For more info contact Andrus at 409-313-0412. Donations of auction items are still being accepted.