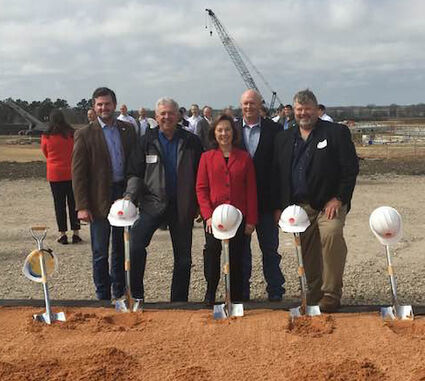 After 35 years of doing everything from climbing poles to dealing with government leaders on its behalf, Johnny Trahan has a long history with Entergy Texas.

And a new connection with Orange County history.

That news came approximately two and a half years after Trahan, newly retired as Entergy’s customer service manager, made a pitch on behalf of Orange County, where he was a newly elected County Commissioner.

“I don’t know how much difference it made,” Trahan aw-shucksed.

“But I had a friend of mine still working for Entergy tell me they were doing a ribbon-cutting for a new plant in Montgomery County and, ‘You might want to show up, because I hear they’re going to do another one in Southeast Texas.’

“I figured it couldn’t hurt, so [County Judge John Gothia] and I decided to go. We even talked to Sallie Rainer [Entergy Texas president and CEO] and told her Bridge City would be a great place to build.”

Gothia said the trip to Willis, Texas, for the groundbreaking in early 2019 was key.

“They’d have never thought of us if we hadn’t gone,” he said. “This is a good thing for us.”

Entergy’s investment decision announcement included a reminder that it first had to gain the approval of the Public Utility Commission of Texas before turning a shovel.

If the PUC approves, construction could begin in 2023 and the plant could be in service in 2026.

The 1.215-megawatt plant will be capable of powering more than 230,000 homes and use a combination of natural gas and hydrogen.

“It’s a pretty unique plant from what I read about it,” Trahan said.

“I didn’t think about it at the time, but hydrogen is a byproduct of a lot of plants in this area, and a power plant gives us a little more security if we have another hurricane.

“The biggest thing, though, is we can get power to future developments around here.”

Rainer noted the helpful supply of hydrogen and her company’s focus on long-term goal of decarbonization and long-term sustainability.

“Southeast Texas is well positioned to play a key role in the transition to increased use of hydrogen in electric generation,” she said.

The new power station would be built adjacent to its current Sabine Power Station, which was built almost 60 years ago. The new plant would replace some of the older plant’s production as it is taken off-line.

That old plant was built before the incorporation of Bridge City and the land it and the new plant will sit upon is part of Port Arthur’s extra-territorial jurisdiction.

Hence, the regular county taxes paid on the plant will go to Jefferson County, though Orange County “will get an in-lieu-of-taxes payment and the Bridge City school district will get taxes,” Gothia said.

If Chevron Phillips Chemical and its partners ultimately decide to build a $6 billion ethylene plant in Orange, that would make two 10-figure investments in the county.

But those are hardly the only big developments on the horizon.

And the City of Orange’s Economic Development held a public hearing Aug. 3 regarding a $300,000 grant to a new Little Cypress housing development that could translate to 182 new homes.

When asked, Gothia said he knew nothing about the details of a tax abatement deal being negotiated with NXO JV, LLC, the new group formed by the doctors and developers “considering an estimated $24,370,000 investment.”

The medical center and healthcare complex will be located on land donated by the Houseman Companies near the intersection of Interstate 10 and Highway 62.

Previously, the city has pledged a $1.4 million expenditure for a roadway and granted a 10-year decreasing tax abatement starting at 100% the first two years and stair-stepping down to 20% for Year 10.

The targeted completion date was pushed back to 2023 in the city’s latest contract with NXO JV.

“I don’t know what the next move is. They have not given it to us,” Gothia said.

“Apparently the group is getting pretty close to where they need to be in putting this thing together. I think we’re all very excited that at one point it’s going to happen. We need it.”

The state requires the establishment of a Reinvestment Zone before tax abatements can be granted. In this case, since the property is in the City of Orange city limits, the city’s Reinvestment Zone will do for other jurisdictions that decide to give a tax break to the new healthcare plant.

“I’m sure they will be going to all the entities for that at some point,” Gothia said.

At its Aug. 10 meeting, Orange City Council voted on an EDC proposal of a $167,000 incentive that would pay a third of a $500,000 addition to Free State Cellars winery in North Orange.

The winery is planning a 1,000-square foot event lawn, with a pavilion, a pond and dock, parking lot and arbor.