A second open meeting to hammer out a new work contract between Orange County's leaders and their sheriff's deputies is expected soon.

Dustin Bock, president of the Orange County Sheriff's Office Employee Association which represents about 85 of the county's 120 deputies, said the lawmen were waiting to hear back from the county and settle on a meeting date and time.

It was clear from the start that the temperature of the rhetoric that boiled over in the press when the deputies' grievances were made public in early September was just a simmer.

The association's leadership and the Orange County Commissioners didn't appear far from a settlement.

The largest sticking point to be resolved centers upon the ability of deputies to appeal any discipline imposed by Sheriff Lane Mooney or his staff.

Under the 2009 collective bargaining agreement still in place, any disciplinary action routinely went to arbitration and an arbitrator's decision is final.

County Judge John Gothia and the four commissioners are adamantly opposed to arbitration, Gothia saying, "We've had some pretty bad experience with arbitrators."

The county wants a district judge to decide, one whose decision can be appealed to a higher court.

"Arbitrators are not bound by the law," Assistant County Attorney Denise Gremillion said to attorney Craig Deats, who represents the deputies.

"This county has a relatively small discretionary budget and every case impacts everybody else's raise for the next five years."

Former Sheriff Keith Merritt refused to negotiate with the deputies because he wanted final say on hiring, firing and disciplining his deputies and the deputies weren't giving in.

A quick takeaway from the meeting would borrow from a 50-year-old line from the movie "Cool Hand Luke": it appeared what they

had – at least prior to Sept. 22 – was a failure to communicate.

Most of the three-and-a-half-hour meeting was dedicated to Deats of the Combined Law Enforcement Associations of Texas (CLEAT) going point by point with Gothia over what Deats thought was the latest version of a new contract offered by the county.

But Deats, who boasted of how many similar negotiations he had handled and another one in Jefferson County beginning the next day, was clearly unfamiliar with the latest updates agreed to by the county and the deputies.

It was clear he was either reading from an old version or had not been brought up to speed on agreed-upon but unwritten changes by the deputies.

County Judge John Gothia has been the county's lead negotiator and has remarked several times about frequent changes in leadership among the deputies' association in the months of informal negotiations.

A 14-year OCSO deputy, Bock is the third president the association has had in the past few months, succeeding Darrell Cowart and Robert Cowart, who are not related. He said he and Mooney had been friends for several years.

"About a month and a half ago, the Sheriff and I talked and I told him I had it in my mind to get involved in the [association]," Bock said. "He said, 'It'll be great.'

Bock was elected vice president to replace Robert Cowart, who was promoted to president. Within a couple of weeks, Bock was the president.

He said he suggested the deputies end their decade-long membership with TMPA and sign up with CLEAT instead.

CLEAT's executive director, Charley Wilkison, issued a press release and restated in an interview with The Record Newspapers that Orange County's leaders were engaged in "union-busting" by holding non-posted, closed-door negotiating sessions.

Wilkison shared with the newspapers two grievance letters signed by Bock, both of which included charges against Sheriff Lane Mooney.

The first was that Mooney had taken away the deputies' permission to drive their patrol vehicles home after their shifts.

Bock stated that Mooney promised to return the "take-home cars" if deputies agreed to the county's proposed contract. 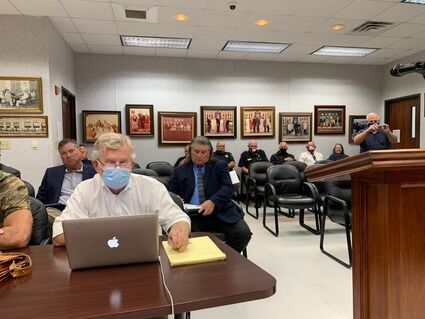 It was suggested by county leaders and supported by a high-ranking member of the Sheriff's Office that it was done by Mooney to cut fuel costs.

Deputy Morgan Downs, an association member who didn't agree with association treasurer Donathan Warner about what happened when and who was present at full membership meetings of the association, said, among other things that Mooney had done away with take-home cars because of not all association members were adhering to a mask mandate by the Sheriff.

Bock said that was wrong.

"The Sheriff and I had several meetings about the cars," Bock said. "He told me, 'The reason I took the cars away was to get people off their butts and sign the contract.'"