Rockers Styx are back in SWLA with new music, tour 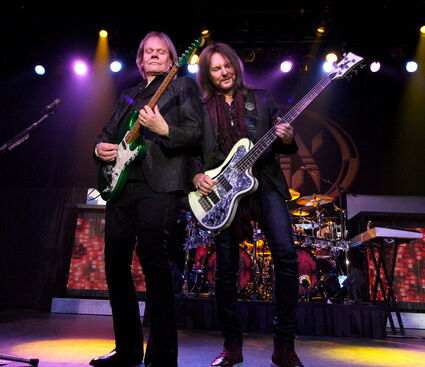 The rock band Styx, featuring members James "J.Y." Young, at left, and Ricky Phillips, return to Southwest Louisiana for the first time since 2019 for a performance at the Golden Nugget Casino in Lake Charles, La.

It has been nearly 50 years since the band Styx debuted upon the music world. Thankfully the band shows no signs of slowing down.

Styx returns to the Golden Nugget Casino in Lake Charles, La., on Friday, Oct. 15. Tickets are $75-$85 each and can be purchased online at http://www.goldennuggetlc.com or http://www.axs.com. This show is for ages 21 and older only and, in accordance with the governor of Louisiana's mandate, all guests are required to wear a facemask in all indoor spaces.

The band has more than 30 hit singles to its credit, including radio staples "Renegade," "Come Sail Away," "Blue Collar Man," "Too Much Time on My Hands," and many others, and is comprised of members James "J.Y." Young, guitar/vocals; Tommy Shaw, guitar and vocals; Lawrence Gowan, keyboards/vocals; Ricky Phillips, bass; as well as original bassist, Chuck Palazzo, and Todd Sucherman, drums.

Styx is touring in support of its 17th studio album, "Crash of the Crown," which was released June 18, 2021 via the band's own label, Alpha Dog 2T/Ume, and debuted at number one on the Top Rock Albums chart. Surprisingly, this is the group's second new album in four years after more than a dozen years without any new original material. The band's previous release, "The Mission," dropped in June 2017.

"I am in my 19th year as a member of the band," said bassist Ricky Phillips in a telephone interview. "Our focus has been on live performances for so long, no matter the stage, venue or weather conditions. With the success of these two albums, and seeing people singing along to these songs at concerts, has been a lovely surprise."

Phillips stated new music could become a more frequent occurrence based on recent changes within the band, such as the involvement of Will Evankovich, who collaborated with the band on the new album, as well as performed on and produced the new record.

The current global pandemic brought a halt to the touring music industry in 2020, but Styx was quick to jump back on the tour trail as soon as it was possible, albeit in a much different manner than prior tours.

"We basically stay in a bubble now," Phillips explained. "And what that means is there are no meet and greets, no family and no friends backstage. All of the tour workers have to be tested. I get tested every time I come back home from a break in touring because I want to make sure everyone is safe.

During the Covid shutdown, the band would get together by doing Zoom calls with each other at least every 10 days," he continued. "We decided to come back together with one mindset and that was to do things as safely as possible."

Pandemic aside, the band has branched out its brand and entered the adult-beverage market with the release of its own signature lager, Oh Mama, which is the opening words of the group's signature song, "Renegade." The lager is part of a partnership with Voodoo Brewing Co. and was done as a continued connection between Styx and the fans of the Pittsburgh Steelers, where the song is played during the third quarter of every Pittsburgh home game to fire up the crowd.

The beverage is sold as a four-pack in 16-ounce cans, or even in 50-liter kegs, and is available nationwide through distribution by Tavour and can be purchased by using its app and the code "renegade" for other states across the country.

"We love doing things that are different and interesting," Phillips admitted with a laugh. "We need diversion, even in the band. It's fun, so we'll see where it goes."

The band will be celebrating its 50th anniversary as a music group in 2022 as the band formed in February 1972. Although there are no plans to speak of at the moment, Phillips feels confident something will be done about this milestone.

"A lot of things have changed through the years, and especially since the pandemic," Phillips said. "But it's a fun time to be in Styx right now."