BC gets jump on sports upgrades 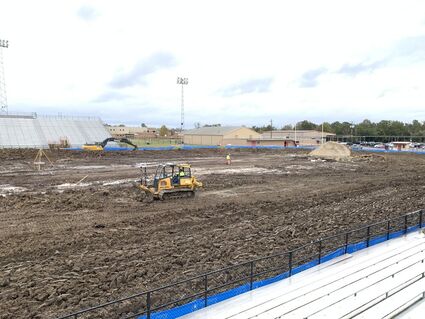 A new set of memories are in store for Bridge City students and sports fans.

The school district has ripped up the 70-year-old playing field at Larry Ward Stadium, as well as the track and nearby tennis courts.

But look for a shiny new artificial turf football field and surrounding track and new tennis courts to be ­unveiled in the spring – hopefully as soon as March, says Dr. Mike Kelly, schools superintendent.

"We should be finished the first week of March," he said. "Our district track meet is the second week in April. We're considering hosting a track meet on our new track March 31."

Improving Bridge City's athletic facilities is just one of three building projects Kelly and the BC school board have on their horizon, all of them paid with money from the district's fund balance.

An addition of a six-room pre-kindergarten wing at the elementary school is soon to begin and a career and technology education building at Bridge City High will follow completion of the artificial turf for the football stadium.

Kelly introduced the idea of spending $10 million of what politicians call "Rainy Day Fund" on construction to the public with a pair of community meetings in October.

Plans had been under way since the summer with a contractor, Hellas Construction of Spring, Texas, having given its sales pitch to a school board work session on Sept. 15.

The company was hired to do the work at the Oct. 25 board meeting, two days before the second public meeting.

Because the district can cover the costs without borrowing construction funds, no bond election was required.

The contract for the athletics re-do with Hellas should come in at $3 million. In his presentations in October, Kelly said upkeep on artificial turf was actually cheaper than grass.

On Nov. 15, a contract for the elementary school addition was approved by the board and signed with Claycombe, which has recently rebuilt the Orangefield school buildings damaged by Hurricane Harvey.

That work should begin over the summer with internal renovations being completed by next fall. The building of the new wing is scheduled for completion in the fall of 2023.

The project will cost $4.5 million, Kelly estimates figuring in higher material costs. But he says $2.1 million of the project will be paid with federal COVID-19 relief funds called Elementary and Secondary School Relief Fund (ESSER).

"This is probably the longest part of the whole process," Kelly said this week. "They have to remove all of the natural soil and create a five-foot hole.

"Then they put in new materials at eight-inch levels and pack it in each time and test to make sure it won't sink." 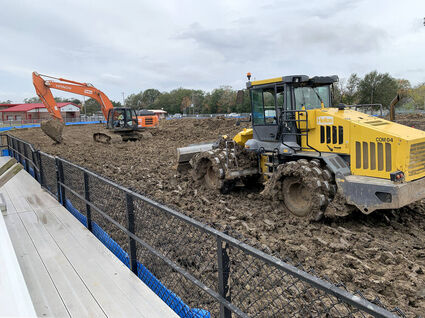 Because of a lack of campus space, plans are for the CTE building to be constructed on an open area between the high school and junior high. Because that space has been used by all of BC's sports teams for practices, Kelly pushed for artificial turf on the football field. That will allow teams and the band to practice year-round, he said.

"There's never a good time to do these projects," Kelly said. "A project that takes 90-100 days, most people do them in the summer, but you may not have the crews and workers available when everybody else is building.

"We have displaced our soccer team but West Orange has graciously allowed us to host our home games over there through the end of February.

"Ideally, our soccer teams will get to play some games in March on our new field. We'll have about a month to get ready for the district track meet, and everything will be set for our kids to graduate in May."