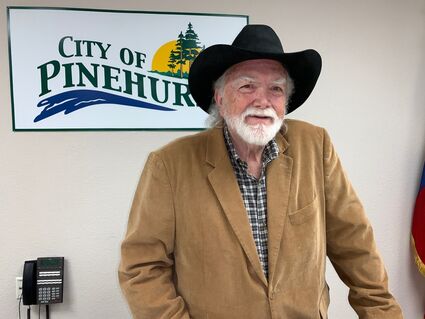 And the City of Orange has named Jim Sharon Bearden to replace Jerry Pennington as municipal court judge upon Pennington's retirement after 28 years on the job.

Permenter, 84, said he's the oldest Pinehurst mayor ever, and he should know. He's been mayor "two or three times," – he can't remember exactly – in the last four decades.

Asked when he first joined the city council, Permenter said it was at least 33 years, because he remembers hiring city attorney Tommy Gunn and Gunn says he started in Pinewood in 1988.

Jones, a fixture at Bridge City's City Hall since 2000, announced earlier this fall that he would be retiring as of Jan. 15.

"First, we have to determine what we're looking for in a candidate," Bridge City Mayor David Rutledge said when asked if there was a timetable to name Jones' replacement.

He said the city had advertised for applications statewide and had received a number.

"I don't know how long it will take. If we find someone that's a good fit, we're going to have to negotiate a contract with them."

With Jones moving out of City Hall by Jan. 15, Rutledge said the plan in the interim is "mostly me" managing the city.

"I'll have to kind of be an interim city manager. It's happened before. But Mr. Jones says if I have questions, I can call him."

Tuesday night his wife, Lyndia, surprised him by arriving just before the meeting.

His wife responded, "I'd been wondering where you were going on Tuesday nights."

Permenter is the third straight Pinehurst mayor to step down before completing his term. He was named mayor in 2020 after Dan Mohon retired.

Mohon, a former Orange mayor, took over in mid-term after the retirement of Pete Runnels.

"It's been a long time and I'm very pleased with the city," Permenter said. "I'd like to say thank you to the city of Pinehurst for allowing me to serve."

Gunn said after the meeting that it hadn't been decided how or who would take over the mayor's office.