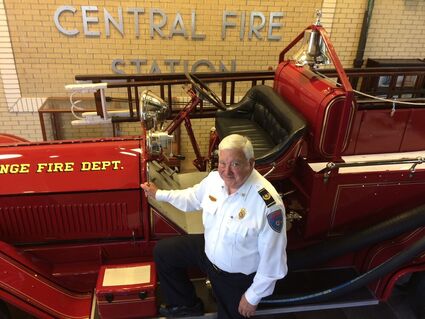 Fire Chief David Frenzel, the longest serving employee in the City of Orange history, is retiring this spring after 25 years as chief and 53 in the Fire Department.

David Frenzel, Orange Fire Chief for the past 25 years is set to retire in April, ending a 53-year tenure at the Fire Department that makes him the longest serving city employee in City of Orange history.

To honor Frenzel, a native of Orange who met his wife Hildy when she worked part-time at the Fire Department, the newspaper is re-running a 2019 story written to honor Frenzel's first 50 years of fire service.

"Leather Lungs" used to be a point of pride among firefighters.

Those were the ones who, through years of fighting fires, had hardened their lungs to the point of withstanding exposure to nasty smoke.

But on-the-job training, deaths while trying to ride to fires and wooden buildings that burned up in the blink of an eye also used to be the norm for those in the fire services.

"Safety issues have changed, and they make all the difference in the world in injuries," he said.

His point of pride now is the rating of 2 – "as low as you can go" from the Insurance Service Office (ISO) that Orange has obtained since he was named chief in 1997.

Frenzel began his career in 1969. His first run was to a car fire at 4th and Cypress St.

"Why you remember something like that I don't know," he said.

Frenzel, who grew up at 1013 13th St. with brother Dolan and his parents Edward and Sophie, seemed destined to follow the fireman's path.

His father, a lineman for Gulf States Utilities deemed too essential by GSU to be drafted during World War II, was president of Orange's volunteer fire department.

In the 1960s, the VFD was replaced by full-time firefighters. Orange was – and remains – the only Orange County "career" fire department.

Frenzel met his wife, Hildy, in 1975 when she was working part-time at the fire station and he married her in 1978. The couple has two sons, Dave and Adam, who are married, and five grandchildren.

Orange Fire Department has 38 employees and three fire stations, same number it had when Frenzel came to the department 50 years ago.

But the head count is about the only thing that's the same.

The "outer" fire stations at 10th and Burton and at Lions City Park have been replaced by new ones at Allie Payne and MLK.

"When I came it was all on-the-job training," the chief recalls. "Now we can't even take an application if you're not certified by the state as a structural firefighter and as an emergency medical technician [EMT].

"That's a minimum of two semesters in college."

There are safer trucks.

"Everybody's inside a cab, behind a door and in a seatbelt," Frenzel said. "That makes all the difference in the world.

"And when I came here, they told you how to breathe in a fire. Now everybody has a self-contained breathing apparatus."

For old time's sake, here's how Frenzel said you "breathe in a fire."

"We learned how to take a deep breath before you went in and then breathe very slowly. You put the [fire hose] nozzle close to your face and that would pull fresh air past you.

"It was crazy," Frenzel said. "Like riding on the back of a [fire] truck. No one would even consider that today."

One of the only two "line of duty" deaths for the OFD occurred when a firefighting Jeep rolled over en route to a call. The other was a heart attack. Both preceded Frenzel's days.

The biggest local fire the chief says he's worked involved the three-story American Bridge administration building at the Port of Orange in 1980.

"We've responded outside the city to some refinery fires in Port Arthur," he said, "but building codes have really made a big change over the last 50 years to decrease the numbers of structure fires.

"Building materials have changed as well as building techniques."

Frenzel says "we almost put ourselves out of business" with an in-school campaign to teach youngsters fire prevention.

And smoke detectors "have made a big difference," he said.

"Because of that every fire department has diversified to things like emergency medical services and search and rescue. A lot of fire departments have changed their names to "Fire and Rescue.'" Frenzel said.

The department began a "First Responder" program in 1995.

Each of Orange's fire stations has one $25,000 medical truck and one $600,000 fire engine. The Central Station downtown keeps the extra equipment, an aerial truck, a boat, a light rescue unit and a heavy rescue unit.

Since last year, the inventory has included military surplus high-water trucks and boats. 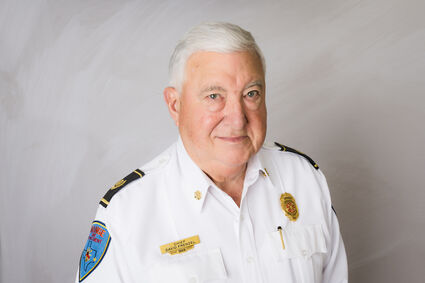 Frenzel has seen many positive changes since he joined the department in 1969.

"We've had too much experience with hurricanes," Frenzel said. "If I don't have another, it'll be too soon.

"In 2005, Hurricane Rita came through and was devastating to the city but we got through it. We had Ike in 2008 and all the storm surge that came with it. If I have to choose wind event or water event, I'll take wind every time.

"Then Hurricane Harvey flooded everything in 2017. At least you can traverse the city with a wind event, cut trees and get around. But with water, it's tough. Water just destroys everything."

But not Frenzel's devotion to his job.

"I still have a few things I'd like to do in the department before I leave. I'm just not ready to go. If I retired today, I'd be looking for a new job tomorrow."