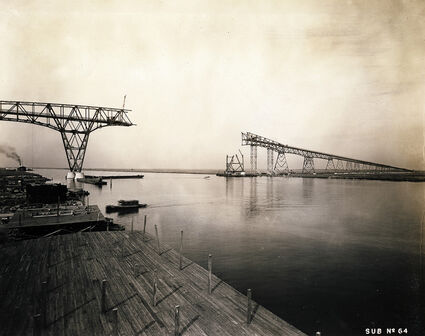 When you look back, it's amazing that the Rainbow Bridge was completed in under three years. It began as a solution for clogged roads caused by Dryden Ferry traffic. Eighty four years later, it still has the tallest vertical span in Texas (177 feet). It cost $3 million, and the lives of many who worked on it.

I wonder whether or not there is anyone besides me old enough to remember when there was no bridge to Bridge City. When one was driving west out of Orange, as you neared the Neches River, you would veer sharply to the left and end up at the loading place for a small ferry. There was only one ferry boat and sometimes there was quite a wait if the ferry had recently departed and was loading on the other side. I remember, remember it quite well, because in the summertime, if we were required to wait on the ferry, the heat was too great to roll the windows up in the car; there was no such thing as automobile air conditioning, mosquitoes would swarm and almost eat you alive while waiting. There is quite a story having to do with the bridge, however.

I remember the bridge opening in 1939, I was five years old and viewed the ceremony while perched on the shoulders of my 6'2" father. As a stunt those putting on the bridge opening ceremony had employed a stunt man from Hollywood who reportedly for $1,000 jumped from the high point of the bridge into the Neches River. Miraculously enough, he survived the crash with a couple of broken ribs and $1,000 richer. Erecting the bridge was not without controversy. The Beaumont leadership opposed building the bridge and sent a delegation to Congress to fight the funding of it. Beaumont's argument was that a bridge would impede the ability of large ships to traverse the Neches River and load and unload cargo in Beaumont. The compromise was worked out when the designers of the bridge agreed to build it so tall that the largest war ship in the American navy would be able to sail under it without a problem.

I suppose sometimes after that the little community on the east side of the Neches became an incorporated town with the name Bridge City.