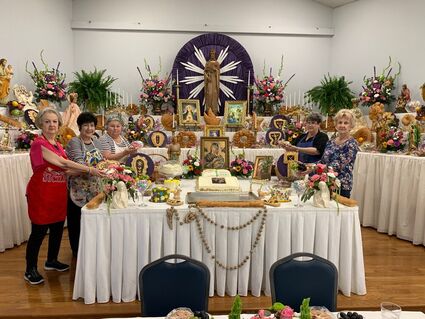 A tradition dating back to the Middle Ages in Christianity has a legacy of its own in Orange.

However, last weekend at St. Mary's Catholic Church, a group of women and men gave the Feast of St. Joseph and its attendant St. Joseph Altar a new twist.

"This year, because of the suffering in Ukraine, we've dedicated the altar to the efforts for peace," Cathy Blanda Brittain said.

She pointed out a framed icon of "Our Mother of Perpetual Help," a depiction of the Blessed Virgin Mary and baby Jesus.

Brittain said many in the congregation had observed videos in recent days of Ukrainians, their cities and homes demolished by attacking Russian missiles, bombs and tanks, praying before similar "Mother of Perpetual Help" iconography.

"We all agreed to a little smattering of sunflowers (Ukraine's national flower) and her this year as a special intention for peace in Ukraine," Geralyn Blanda Vine said, glancing at the gold-framed "Mother of Perpetual Help."

It was the 22nd annual "Labor of Love" by the church members who joined to create the St. Joseph Altar and accompanying meal.

Nearly two dozen women and half that many men were up early Saturday putting on the finishing touches for Sunday's feast.

The Feast of St. Joseph is an Italian tradition that began in Sicily to honor St. Joseph, the husband of Mary and patron saint of the needy, for answering prayers by bringing rain to end a Middle Ages famine.

The altar is an elaborate series of tables covered in breads, cakes, cookies, fruits and nuts, flowers, figurines and icons.

And, according to tradition, leftovers are shared with those less fortunate. 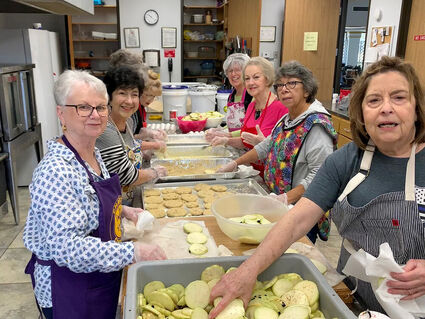 When Vine and Brittain were growing up, many Catholic families in Orange set up St. Joseph Altars in their family homes. They are supposed to bring good fortune.

Bonnie Backer, among those helping Saturday, had a photo of her parents, Mickey and Mary Blanda, in front of the St. Joseph Altar in the home she grew up in.

Brittain has been heading up the St. Joseph's Day celebration since 2017.

The Knights of Columbus men "do the cooking, under Glenda's direction," Vine said.

Preparation begins almost a month prior to the meal, preparing the dough. Cooking began Friday.

"It's a large community effort," Vine said. "It's a tradition."