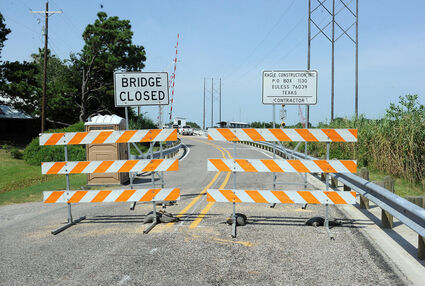 After three weeks of being closed to roadway traffic, the East Roundbunch swing bridge was being repaired and a new master control panel tested by technicians Tuesday afternoon.

The outlook for reopening was good and it can’t come soon enough for Peggy Albair.

Her restaurant, Peggy’s Place, is at the north end of the popular shortcut from Texas Avenue in Bridge City to the plants on Chemical Row, also known as FM 1006.

The bridge, which used to bring Albair a packed-house lunch and dinner business, has been mostly closed since early in 2017.

“It’s affected my business tremendously,” she said. “If they’d have built a big bridge, we wouldn’t be having this problem.”

The swing gate bridge’s roadway that crosses the Cow Bayou is built on a center pier and rotates horizontally to a 90-degree angle to allow barge traffic to pass.

It is operated from a non-moving control room at the center of the bridge, with the touch of a button.

Or at least that’s the way it works when it’s working, according to Orange County Engineer Corey Oldbury.

It was working pretty consistently in April, when it was opened 90 times (3 per day) to let barges come to and fro, mostly business for the Knife River road materials site alongside Highway 87 and Cow Bayou, or Burton Shipyard, which is just around a turn in the bayou from Peggy’s Place.

In May, the bridge was opened 66 times for barges.

Over the off-and-on course of five years, the Texas Department of Transportation tore down and replaced the swing bridge after engineers had ruled it unsafe.

Weather (three natural disaster hurricanes and tropical storms) and the COVID-19 shutdown interrupted work on what was expected to be a $9 million replacement and mechanical updating of the bridge.

The last cost listed was $11 million.

TxDOT initially tried to get Orange County to take possession of the bridge in 2021, but a series of problems closing the gate automatically delayed the OK by OC.

"We all know that bridge is a lemon," Orange County Commissioner Johnny Trahan declared when the subject came up at a commissioners court meeting in December 2021.

“If we had taken ownership of this bridge three months ago, we’d have been out way in excess of several hundred thousand dollars just to keep this bridge open,” Orange County Judge John Gothia said then.

“I really don’t feel it’s in our best interest to have this bridge, but we’re stuck with it,” he said.

At its best, it still costs the county about $150 to $200 in labor costs each time it opens and shuts the bridge.

A Road & Bridge worker is on call 24/7 to drive to the bridge and push the buttons and each time they answer the call, the county pays them four hours of salary, Oldbury said.

When the swing bridge would almost close, leaving an unsafe gap, the county had to send a crew of four to manually close it.

But things had been going well this spring. Until they didn’t.

“We’ve had some problems, but we’ve never had to shut it down for weeks like we have this month,” Oldbury said. “This was much worse.”

And the cause of the June 2022 shutdown?

“A person on property near ours was clearing some land, they hit a tree, it went into some power lines and bounced up and hit a high line. So we had 69,000 volts go through a transformer and it blew the main brainbox of the bridge,” he told County Commissioners on June 14.

“There have been a lot of questions why we didn’t replace this bridge some other way,” Gothia said. “It was not our choice. It was not our option. This bridge is an historical bridge. It had to be replaced as it was because it’s listed by the Texas Historical Commission.” 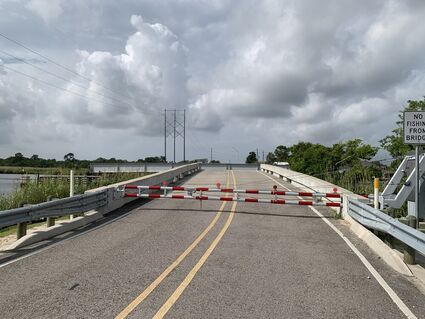 A spokesman for the Texas Historical Commission told The Record last Friday that there were only two swing bridges listed in the state, and only one is in Orange County.

That would be the Cow Bayou swing bridge on Texas 87, about a mile and a half east of the East Roundbunch Bridge.

The bridge on Texas 87 was opened in 1940. Clark Slacum, Oldbury’s predecessor as County Engineer, told reporter Margaret Toal the East Roundbunch was constructed in Orange County in 1961, after being moved from another location.

“If TxDOT would take over the (E. Roundbunch) bridge, that would be super,” Oldbury said.

“They do have FM 1442 across 87 halfway down East Roundbunch to Osborne. That’s where it stops being TxDOT’s road and begins being ours.”