Veterans Day goes back to Armistice Day in 1918 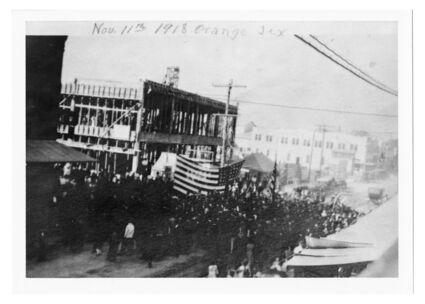 This historical photograph from the Heritage House Museum collection shows downtown Orange celebrating the end of World War I on November 11, 1918, Armistice Day.

City halls, the county courthouse, state and national offices, and banks will be closed Friday for Veterans Day, a national holiday that dates back 104 years. But the holiday was an evolution.

November 11, 1918, was Armistice Day, the day the peace accord ending World War I was signed. The famous signing was scheduled for "the 11th hour, of the 11th day of the 11th month." The signing was in Paris, France, which translated to 5 a.m. in Orange.

At that precise time, the local shipyards and lumber mills blasted their steam whistles, according to the Orange Daily Leader afternoon edition of the day. Nobody cared about the early hour. The war was officially over.

The paper reported that within minutes, the streets of Orange were filled with cars of cheering people waving flags and patriotic buntings.

Orange was the only incorporated city in the county until the mid-1950s, so celebrations were centered in town. The city had grown from 5,500 people to an estimated 20,000 because of the wartime shipbuilding. The city streets were crowded, but no one cared.

The newspaper reported impromptu parades of cars and people formed and traveled around. Finally that morning, Mayor O.R. Sholars called for a formal parade in the afternoon.

The next day, the Daily Leader had a banner headline reading "Peace Parade Largest in City History."

The widespread devastation and death from World War I brought it to be called "The War to End All Wars." However, humans did not learn their lessons. In September 1939, Europe broke out in war again. The United States joined the fighting a little more than two years later, after the Japanese attacked the naval base at Pearl Harbor.

The Veterans Administration history reports 16.5 million Americans were in the service during World War II, with 417,000 dying while in the service, and 292,000 of those being killed in battle.

Raymond Weeks of Birmingham, Alabama, thought that the men and women who served during World War II needed to be honored and he came up with the name "Veterans Day" for the November 11th Armistice Day. The name caught on, and in 1954, President Dwight D. Eisenhower, himself a veteran and retired general, signed a law making November 11th Veterans Day holiday.

Veterans Day was created to honor all people who have been in the armed services, whether in wartime or not. Memorial Day is a separate holiday that is to honor those who lost their lives while in military service.

Congress in 1968 changed most federal holidays to fall on a Monday so people could have a three-day holiday. Veterans Day was changed to the last Monday in October.

One more presidential decree was made in honor of Veterans Day. President Ronald Reagan honored Raymond Weeks, who gave the name to the holiday, the Presidential Citizen's Medal.

Veterans Day celebrates peace, and the people who serve in the military hoping to keep that peace, but are ready to fight, if needed.