Shinedown, Godsmack deliver concert of the summer for Houston faithful

Make no doubt about it. The concert of the 2018 summer concert season took place this past Saturday night, and if you missed it, then you will just never know how amazing it was.

Two of the biggest bands in rock of the past 15 years returned to Texas this past week for a concert at the Cynthia Woods Mitchell Pavilion in The Woodlands, which is just north of Houston, and delivered two magnificent performances on one stage.

Shinedown, touring in support of its May release, “Attention Attention” hit the stage at full speed with the opening number “The Sound of Madness” and never relented through its 12-song, 75-minute set of hits and new material.

Vocalist Brent Smith controlled the audience with charm and charisma, while his bandmates Zach Myers (guitar), Eric Bass (bass) and Barry Kerch (drums) were a well-oiled machine from song-to-song as the band delighted fans with hits such as “Cut the Cord,” “If You Only Knew,” and “Second Chance.”

The band didn’t forget to showcase its new material from the group’s sixth album, “Attention Attention,” as Smith unveiled the newest Shinedown single “Get Up” and also performed the album’s lead-off rocker, “Devil,” as the encore.

The highlight of the evening was when Smith and Myers performed the Lynyrd Skynyrd cover of “Simple Man” acoustically and had a giant sing-along with approximately 16,000 friends who lit up the amphitheater with their cell phones and lighters to create a truly memorable moment.

The only minor disappointment of the evening was that Shinedown neglected to include any material from its first two records, but that is something fans could overlook until the band returns for a full headlining show in the future.

Godsmack was not to be outdone by Shinedown’s energetic and vibrant performance and made sure fans received every penny worth of the ticket price paid on this Saturday night showcase.

From opening note to last, frontman Sully Erna and company unleashed rocker after rocker upon the Houston fanbase during its 75-minute set featuring 13 tracks.

The band opened with the hard rocking tune and title track of its April release, “When Legends Rise,” and kept its foot on the pedal as the churned through heavy hitters “1000hp,” “Awake,” “Voodoo” and “Whatever.” Other new songs performed this night included “Unforgettable” and, first single, “Bulletproof.”

Erna and Godsmack drummer Shannon Larkin delivered a stunning drum battle turned drum duet, also known as the “Batalla De Lose Tambores,” as the two showcased their skills behind the kit, simultaneously and separately. This is always a fan favorite and did not disappoint this night either.

Erna, smiling and joking with the audience throughout the night, then invited members of Shinedown and the opening group, Like a Storm, to join Godsmack onstage for a little fun as the musical colleagues jammed out a rousing version of “Highway to Hell” by AC/DC.

Before leaving the stage for the night, Erna complimented the Houston fans by saying it was by far the best crowd on the tour to date.

Opening the night’s concert was Like a Storm, which calls Auckland, New Zealand it’s home. This four-piece hard rock act quickly caught the attention of those who arrived early as vocalist Chris Brooks came on stage and began playing a didgeridoo, which is an Australian wind instrument created by some of its indigenous population.

The band wasted precious little time of its 30-minute all out assault of rock and roll and quickly won over the early arrivers with its energy. Touring in support of its June release, “Catacombs,” the band included the songs “Pure Evil” and “The Devil Inside” in its all too brief five-song set. Look for more of these guys in the coming months.

If You Only Knew

State of My Head 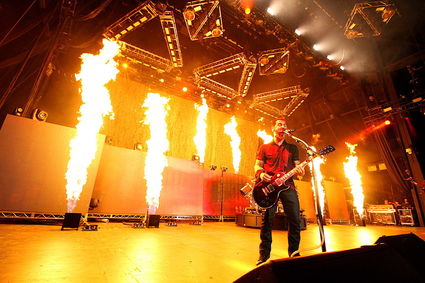 Sully Erna of Godsmack leads his band through a 75-minute set of hard rock hits, pyro, lasers and more during the band's Aug. 11, 2018, concert in The Woodlands. (Photo by Tommy Mann Jr.)